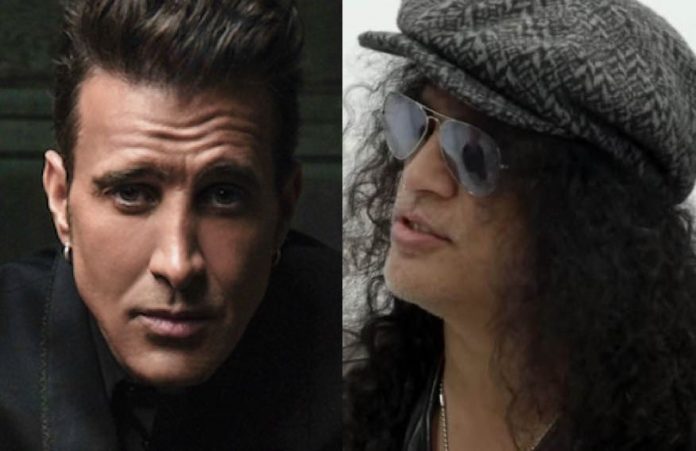 Scott Stapp has been frequently asked recently about a rumored Creed reunion, and said that he has been in contact with Mark Tremonti.

Stapp was recently asked about the possibility of Creed reuniting in a Loudwire Nights interview.

“I tell you man, everything’s positive with the band. I love those guys, we share so much history together and so many amazing things that we accomplished together as a band. I think as soon as there’s any new information to share, I promise Toni, I will call you up and I will share it with you. I promise. You have my word,” he laughs.

Guns N’ Roses guitarist Slash revealed in a new CFOX interview that Creed members Mark Tremonti, Brian Marshall, and Scott Phillips will be busy for the forseable future, as Alter Bridge have finished recording basic tracks for a new album, as transcribed by Ultimate-Guitar.

“Yeah, I talked to [Myles Kennedy] yesterday and they just finished their basic tracks on their new record. I mean, we’ve only been home for two weeks. I’m really amazed at that, like, ‘Are you kidding? That was so fast.’

“One of the reasons why Myles and I get along so well – we’re sort of workaholics, we just fucking play at whatever capacity all the time. As soon as we end one thing, we’re jumping on another.”

He also said about working with Kennedy, “Yeah, it started out very innocently as a solo project when I did this [self-titled] record with all these different singers back in 2010.

“Myles was one of the singers I’ve worked with, and I needed to put together a tour for this record. Obviously, I couldn’t take all these different people, so I went to Myles and asked him if he wanted to be the front guy for this because he has such an amazing range and is capable of something diverse.

“So he signed on to do it and I was auditioning drummers and while I was doing that I was mostly playing with drummers I know, and people kept pointing out this guy named Brent Fitz who I’ve never played with before.

“So finally I called him up and he turned out to be fucking perfect for this. He introduced me to Todd Kerns and we started rehearsing and it was just this spark, this thing that happened.

“We went out on the road supporting the solo record and then I thought, ‘Let’s do a record of original material ourselves,’ so we did [2012’s] ‘Apocalyptic Love.’ At that point, I already called it Slash Featuring Myles Kennedy because he deserved that recognition, he was the frontman for this project.

“So when we did the ‘Apocalyptic Love’ record, we got to give it some name to the band, so he came up with The Conspirators and that name has stayed the same this whole time. But as long as it is, it is what it is.

“I stirred the whole thing, my project, but it’s very much a band kind of a thing, everybody has input on it, and I definitely am not a dictator as far as that goes.

“I think everybody is very happy; we just get together, I come up with an idea, everybody jams on it, and if it’s good, we use it. If not, we move on to another one. It’s a very simple kind of a group, very little hassle.”