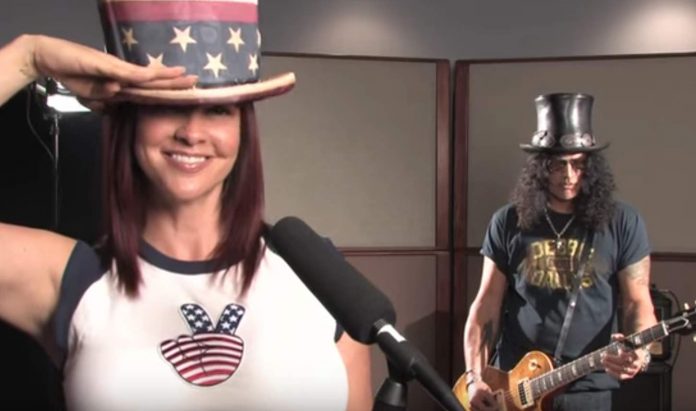 “It’s been four years since [Slash] left me and the boys, and we’re still not divorced,” Perla said (hear audio below). “For the first, like, year and a half, he did nothing — he just dragged his heels. He did this to me again. Slash has filed for divorce a few times, so this time I didn’t know what… if it was any different than the last time.

“It’s really sad because it’s a situation where I sat down with Slash originally and I told him everything that I wanted, what would make me happy, and how I wanted to move forward,” she continued. “And that was four years ago. Four years later, here we are leaning towards all of that. And yet I’ve spent — I don’t know — six, seven hundred thousand dollars in legal fees. The stress — I’ve put on so much weight. My neck, my back has been horrible, and it’s all stress related.”

“I thought that when we separated… For the first year of our separation, I still worked for him — I still worked for our companies — and I thought that I’d always be a part of that,” she said. “Because when I looked out for Slash… There’s a difference with someone like me and there’s a difference with someone like your average business manager per se. Your average business manager is looking at you, like, ‘Holy shit. I need to make as much money off of you right now, ’cause I don’t know the day that you’re gonna fire me. I don’t know if I’m gonna get other clients. I don’t know what’s going on. So I’m gonna let you make shitty decisions as long as it loads my pockets.’ With me, it wasn’t like that. I wouldn’t let him make shitty decisions. I was always looking at it as a long-term… For me, with him, and even if I was still representing him… Now, it wasn’t about, ‘Give me a two-million-dollar advance upfront’; it was, like, ‘Hey, I’d rather have a bigger percentage along the years than the percentage upfront.’ But yet everybody else around him wanted a percentage upfront. So our divorce has really become quite nasty and political, and it’s due to these other people and influences. It’s other people’s interests — other people’s interests are benefiting from our sadness and our children’s sadness and the destruction of our family. And that’s the worst part about a divorce. And now, I get it, I see it — he sadly doesn’t.”

“If Slash ever hears this one day, the truth of the matter is, and I’ve told him always, ‘You can’t be the fucking best at everything,'” she said. “He is hands down the world’s best motherfucking guitar player of all times. I give this to this man — hats off, salute. I see his dedication. Yeah, he has a natural talent, but this man works for it. There’s a guitar in his hands 24-7, and I give him that. But you can’t be the best that and be a great business person. And you can’t be great at all these other things. And that’s more or less what I’ve been telling my children — it’s the same thing. They’re, like, ‘Why isn’t our dad there more? Why isn’t dad like so-and-so’s dad?’, and what have you. And the truth is that’s not who he is — he’s never gonna be that. He’s the best at this other thing that gives us this lifestyle, and he loves you the way he loves you. And that’s how he’s capable of loving you; it’s not that he doesn’t love you…”

“I have to say I’m genuinely just happy for him [about the Guns N’ Roses reunion],” she said. “That’s because what makes you or I could be a hug from our children, and I’m not saying that that isn’t something for Slash, but what makes Slash [and] gives him what he needs is getting up on stage and playing in front of hundreds of thousands of people and being able to really touch people around the world. And this is what fuels him. So I’m happy for him — I’m happy for him. I don’t need to be backstage next to him. I wasn’t there when I was married to him; I was at home raising the kids or working for him or something. So, really, there’s nothing of that that I miss. I’m just really happy that he got the chance to do that and that his kids are getting a chance to see him in that light. And I just hope it really lasts.”