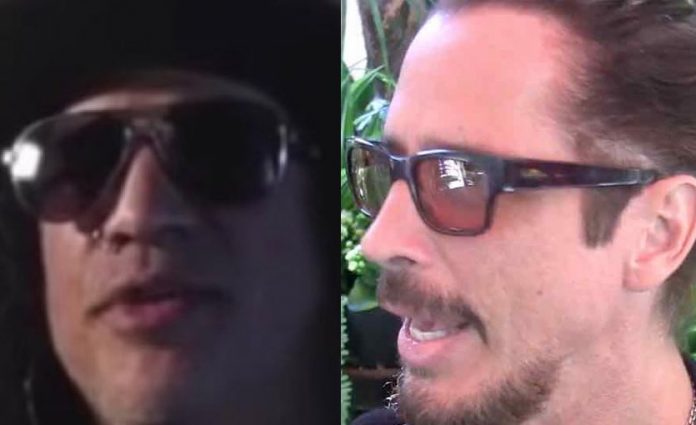 Guns N’ Roses guitarist Slash has revealed a never before seen photoshopped photo that he either found somewhere online or created of late Soundgarden and Audioslave frontman Chris Cornell with late Linkin Park and Stone Temple Pilots singer Chester Bennington. Saturday would have been Cornell’s 55th birthday, and it was the two-year anniversary of Bennington dying by suicide. Slash recently revealed a stunning Jimmy Page shirtless photo.

Chester’s widow Talinda Bennington posted a video on Saturday, writing, “I woke up and this was on my heart… take care of each other today. Enjoy every moment of it. #makechesterproud #320changesdirection.”

Chris Cornell’s daughter Toni posted on Saturday, “Happy birthday daddy. I wish you were still here. There’s so much I want to tell you but I’m sure you already know…”

Audioslave and Rage Against The Machine drummer Brad Wilk wrote about Cornell on Saturday, “Happy Birthday Brother. I cherish the moments spent with you. Time is the ultimate illusion. Music is for always.❤️”

In a 2018 Classic Rock Magazine interview, Slash addressed rumors that Chris Cornell was set to join Velvet Revolver as their lead singer.

Slash and Chris Cornell recorded the song “Promise” in 2010 for Slash’s self-titled solo record. Cornell died by suicide in May 2017, and Weiland died from a drug overdose in December 2015. You can visit ChangeDirection.org for mental health resources and call the Suicide Prevention Lifeline at 1-800-273-8255.

I woke up and this was on my heart… take care of each other today. Enjoy every moment of it. #makechesterproud #320changesdirection pic.twitter.com/oZdkeyvuWq