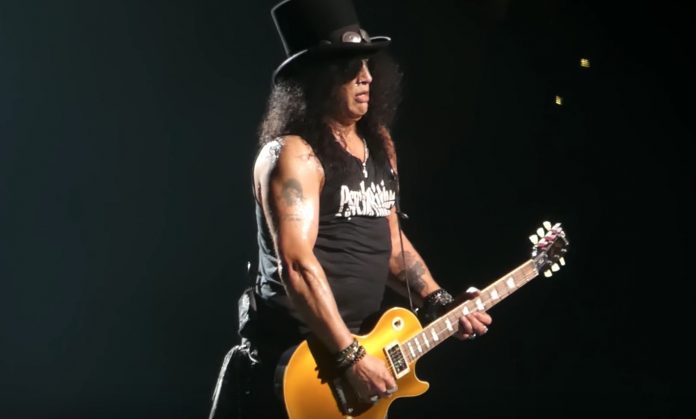 Slash featuring Myles Kennedy and the Conspirators’ new album Living The Dream debuted at #27 on the Billboard 200. The album sold 19,609 physical copies in its first week on sale, ranking higher on the physical sales list than physical and streaming. He finished behind Brockhampton, Josh Groban, Eminem, Drake, Travis Scott, Post Malone, and many others. While not a chart topper, the sales have to be seen as fairly successful with rock no longer being a chart topping genre.

Blabbermouth reported that Slash’s 2014 album World On Fire sold between 25,000 and 28,000 copies in the United States in its first week of release, according to industry web site Hits Daily Double. The estimate was based on one-day sales reports compiled after the record arrived in stores on September 16th via Slash’s own label Dik Hayd International distributed through Roadrunner Records (Europe, Middle East, Africa and Latin America).

World On Fire was the second album to feature Slash’s regular backing band, Myles Kennedy and the Conspirators, and followed up 2012’s Apocalyptic Love, which sold around 38,000 copies in the United States in its first week of release to land at position No. 4 on The Billboard 200 chart.

Slash’s self-titled debut album scored the highest new entry on The Billboard 200 chart in April 2010, with first-week U.S. sales of around 60,000 copies.