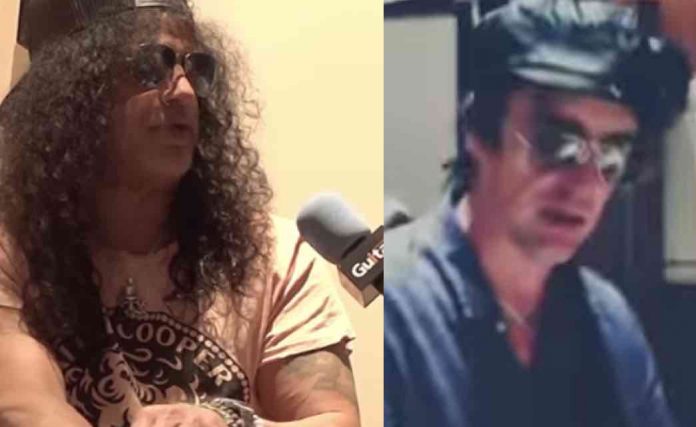 Slash claiming that Izzy Stradlin quitting Guns N’ Roses in 1991 no way changed or ruined the ‘Use Your Illusion’ tour was detailed by his replacement Gilby Clarke in a new Riki Rachtman’s Cathouse Hollywood Podcast interview. Slash brutally firing a GNR bandmate was just revealed.

Gilby said about starting the gig, “I’m not nervous. It’s so odd because I’m just not a nervous person. Like, I was excited, I was anxious, I was ready, I mean, my whole life – like you said, everybody else got gold records, this was my moment. What was odd is when I got out there, the audience was so receptive, and I really believed that just because Izzy [Stradlin] and I don’t look that different, people didn’t really know Izzy wasn’t in the band.

Slash had always said back then, he was really amazed at how that transition went so smoothly. It was just kind of accepted, people didn’t rebel about it and stuff, and it was a big move for the band. What I didn’t realize was, what I’ve never done before, all the bands I’ve ever been in we barely played even a headline set, 45 minutes, maybe an hour… we played for three hours.”

He also discussed fame, “We go through our lives – you are recognized more, and you get used to it. You get used to when you go to the gas station and somebody is looking. You don’t always assume, ‘Oh, everybody knows who I am,’ but even in the early Hollywood days, I’ve been around for a while, I knew guys at the gas station, the guys at the grocery store, so I was kind of used to. Granted, this was a whole different level, that band was huge.”

Slash discussed watching a big name woman abuse heroin in a movie a few weeks ago. A Guns N’ Roses fan on MyGNRForum.com recently discussed Izzy Stradlin, and if he considers him to be retired, in a new topic. Bass Demon posted, “The guy is so unpredictable he could show up on the next leg of the tour and play a few shows.

He played a major part in GNR success in the 90’s but he probably didn’t like how big it got, with the gaps between gigs the big production, Axl’s antics, and all the madness that goes with being in a big band. He probably just wanted to play in some bar and go to the next one without a big fuss. I doubt he’s retired, probably just doesn’t want to play the fame game.”