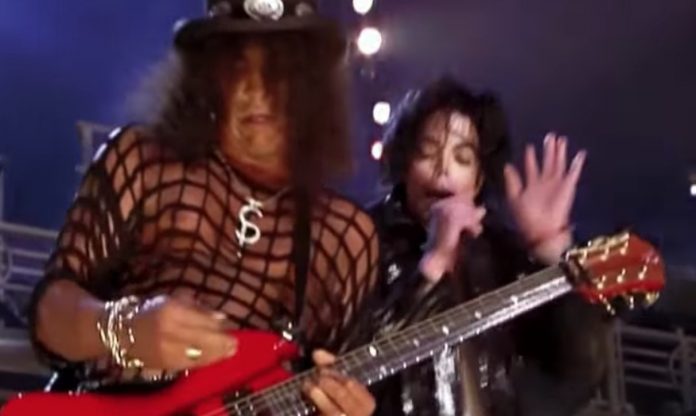 Howard Stern discussed seeing Slash and Michael Jackson live on his show a few months ago when interviewing Gary Clark Jr. Howard said Gary is doing it and living his fantasy. He said he loves it. Gary said he’s having a good time. Howard said he’s great. Gary said he was doing some stuff and he made some mistakes in that song.

Slash’s Guns N’ Roses bandmate Duff McKagan recently addressed Izzy Stradlin’s lack of participation in the ‘Not In This Lifetime’ tour, and a GNR member also made a bold Brad Pitt claim in a new interview.

“Touring in a big rock band is not for everybody. That’s my take on that. It’s a thing — this is a thing.”

McKagan was noncommittal when asked about Stradlin saying there was a money disagreement, “I don’t even know. At the end of the day, we just couldn’t figure it out.”

“I don’t wanna say anything that’s untoward, because I love the guy. Slash and I are sober guys, and we went at it with a solution-based [attitude], like, ‘Let’s make this work.’ But it just didn’t. And who knows? Maybe some other time.” Slash reunited a few weeks ago with former Guns N’ Roses bandmates who had been fired from the band.