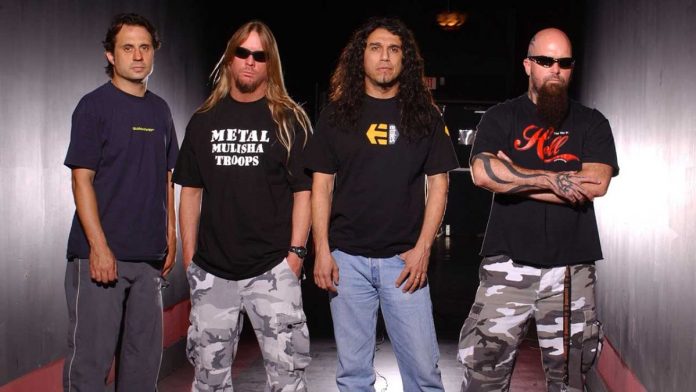 Slayer guitarist Kerry King joined in for a conversation with Metal Hammer, and recalled looking back on his brief tenure in Megadeth. He went on to reveal how he turned down a huge offer from Dave Mustaine to join Megadeth. A Slayer member had previously claimed that Internet would ‘Destroy’ first album.

King joined Dave Mustaine and co. for several shows back in 1984, after which he fully focused on Slayer. During the interview he was asked if he had “any sense then that Dave Mustaine was resentful towards Metallica.”

Kerry replied that he looked up to Mustaine ever since he was in Metallica. He reminisced being in the crowd with Jeff [Hanneman, Slayer’s late lead guitarist] and was in awe of the legendary guitarist.

“He’s got a great style and in the beginning, it helped Metallica become what Metallica is. And let me tell you something – to this day, he’s a great guitar player.”

He then recalled having the conversation with Mustaine, who approached King with an offer to join Megadeth but he denied it.

“But yeah, I played five shows, and then Dave wanted me to stay around, but I didn’t have any reason to stay around because I had Slayer. I remember having a conversation with him and saying like, ‘Yeah, but we have all this dark stuff,’ and Mustaine saying something like, ‘Well, we’ve got this song, it’s pretty Satanic.’

“And I was like, ‘At the end of the day, dude, it ain’t about that. I came to play with you. I think it went spectacularly well but it’s time for me to get back to my band,'” added King.