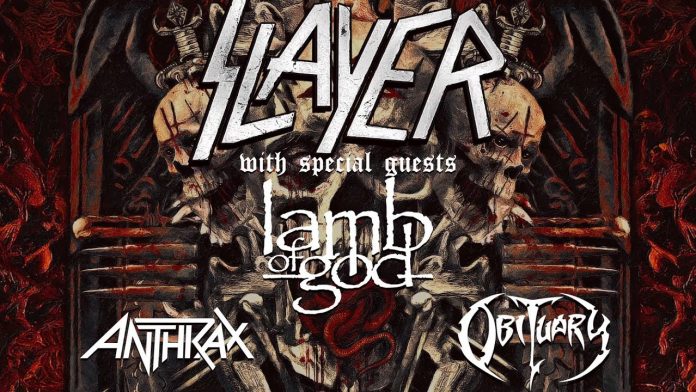 Since 1981 Slayer has been a driving in the metal scene. Starting out as a Venom/ Mercyful Fate stle band on their debut, Show No Mercy. but then permanently shifted over to thrash metal on their second album Hell Awaits and would gain fame on their third record Reign in Blood landing them a spot with Megadeth,Metallica and Anthrax as the four highest selling thrash metal bands of the 1980s, better known as the Big Four of Thrash Metal.

Sadly in 2018 Slayer confirmed that their story will come to and end after 37 years of constant thrashing. When these metal titans announced a final tour will take fourth over the summer of 2018, tickets vanished the moment shows went on sale as those who never saw Slayer live knew this was their last chance and long time Slayer fans saw the need to experience their live set one last time. For tour support Slayer brought back Lamb Of God and Behemoth from last year’s tour and added fellow 80’s thrash acts Testament and Anthrax to the bill. Also on later dates of this tour Behemoth will be swapped out for grindcore legends, Napalm Death. With a stacked line up of huge name metal acts, this quickly added more reasons for this tour to be one of the most anticipated metal events of the year.

The tour’s first Tri-State Area stop was at the PNC Bank Arts Center in Homdel New Jersey. As soon as the doors opened at 4pm this iconic venue was packed to the brim and the numbers only increased as the show went on. Fans quickly found there spots and grabbed whatever food and water they need as only an hour later, the first band would start.

From 5pm till around 5:45pm Testament took the stage. For the first half of the set, they focused mostly on songs from the later part of their career showing they aren’t a band stuck on spamming their classic material. This didn’t mean they abandoned the classics though as the second half was all tracks from their sophomore effort, The New Order. The band sounded spot on thanks to the venue’s awesome sound system, something that would stay through the entire show.

At around 6pm the tone changed from high energy thrash to that of blackened death metal darkness when Poland’s very own Behemoth started playing. Their music evoked an overpowering cloud of darkness onto Homdel and the crowd went from moshing to embracing their inner evil to killer tracks like “Demigod” and “Ov Fire and Void”.

This all made a 180 turn at 7pm when Anthrax opened their set up with “Caught in the Mosh” and many pits formed all over PNC’s lawn. The set was made up of other 80’s hit such as “Madhouse” and “Antisocial”. This combined with the fact that vocalist, Joey Belldonnna’s voice sounded exactly like how it did 30 years ago made this set a real crowd pleaser.

https://www.youtube.com/watch?v=y9RbUmOi860
At 8pm Co-headliner Lamb of God brought their southern groove metal to the table. The battle ground that Anthrax turned the lawn into got ten times bigger as pits formed everywhere and evolved into trails.


Finally at around 9:30 the feature presentation started. Slayer started their set off with the title track from their latest album “Repentless” and then quickly shifted to the 1990 deep cut, “Blood Red”. This was a good way to showcase what the set would be like as the next several tracks would include a mix of newer songs like “Jihad ” and “As Stillness Comes” and classics like “Portmortem”, Dead Skin Mask” and the rarely played “Black Magic”. Once the set was nearing the end, Slayer played all their most popular songs in a row including “Hell Awaits”,”South of Heaven”,Angel of Death”, “Raining Blood” and the obscure concert staple “Chemical Warfare”. Not a dull second went by in the set as the band had endless energy, great sound and the crowd became one giant war assemble. The crowd left the venue happy as their hunger for one last taste of Slayer was more the satisfied. This performance showed the world that Slayer went out exactly how they started, full of energy,excitement and intensity. Special thanks to Stephen Keeler for the photos.