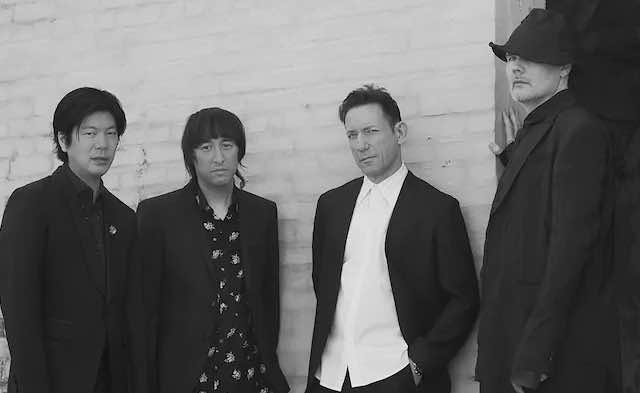 (Los Angeles, CA) July 14, 2021 – Jeff Schroeder, long time guitarist for the Smashing Pumpkins, is ready for his solo debut with today’s release of the single, “Haenim”, a fuzzed-out shoegaze-pop cover featuring Korean American vocalist, Heeya So. The song was written by Shin Joong Hyun, an influential Korean rock ‘n’ roll guitarist, and initially appeared on 1973’s Now, a psych-folk LP released by a teenager named Kim Jung Mi. “The song is about finding a certain type of spiritual rejuvenation out in the countryside—being refreshed and renewed by the experience of being close to nature,” Schroeder says. “I really liked what it was about, particularly considering what the world has gone through for the past year.”

To record “Haenim,” Schroeder decamped to The Cave Studio, a Los Angeles space owned by Josiah Mazzaschi, and enlisted bassist Arion Salazar and drummer Shane Graham. A Georgia-based artist, Heeya So, added vocals remotely. “I had to find someone that was comfortable singing the song in Korean, but also understood the vibe,” he says. “I wanted someone who could bring a Nico-esque character to the vocal performance. Heeya did such a great job.”

But why a solo outing now? In June 2020, musician Jeff Schroeder found himself back in Los Angeles full-time, living in Koreatown. Even with pandemic-related lockdown measures in place, the Smashing Pumpkins guitarist relished exploring his new neighborhood. During the COVID lockdown, Schroeder took to riding his bike around the neighborhood and experiencing the different types of people and cultures along the way. Among those he encountered: a younger generation of Korean-American artists and restaurateurs striving to honor and chronicle the cultural history and traditions of previous generations. “It was kind of like ‘If we don’t embrace it, this stuff will be forgotten,'” he says. The passion for this kind of preservation resonated deeply with him—Schroeder himself is Korean-American—as did Koreatown’s bustling energy and creativity. These daily bike rides began to influence that art that he was making.

Among other things, Schroeder also saw the recording of “Haenim” as a nod back to his family’s roots in Korea. “Much of my life, my existence of who I am, is because my mom was born there, and was from that generation,” he says. “‘Haenim’ really connects me to that culture.”

Schroeder has been touring and recording with the Smashing Pumpkins since 2006 when a friend texted him that the Pumpkins were looking for new band members and he quickly abandoned the grad school program he was pursuing at UCLA after landing the gig. Playing in Smashing Pumpkins all these years has inspired Schroeder to become “a better technical guitar player,” he says. “There’s things that I hear in my head that I want to be able to play, and so when you reach the kind of technical frontier where you’re like, ‘Okay, there’s certain limitations here,’ I just decided, ‘Okay, I want to be able to play some things in my head that I can’t technically do.'” In recent years, he’s also taken jazz guitar lessons during a time when Smashing Pumpkins was off the road, and contributed to albums by the shoegaze band Ringo Deathstarr and electro-pop act Night Dreamer.

Yet as Schroeder approaches his solo work, he’s looking inward for inspiration—contemplating where he’s been both musically and geographically, and connecting it to where he is in the present day.

“What’s influenced me more than anything is an internal spiritual journey,” he says. “You realize at a certain point in your life that you have all these experiences within yourself—all these tastes and likes that I have, and things that I enjoy—and then there’s part of you that has to translate that and present it to the world.”