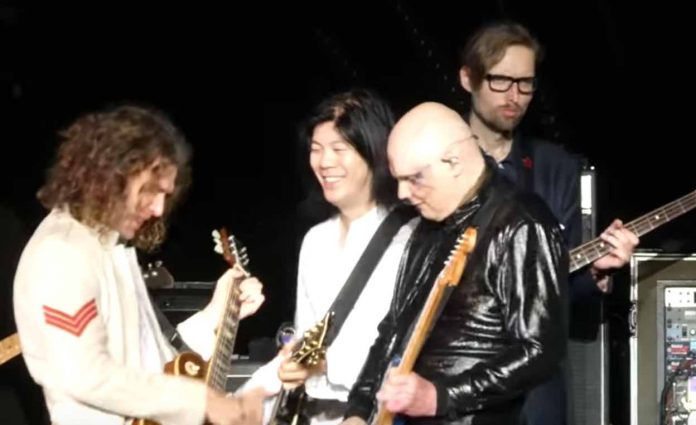 The Smashing Pumpkins were joined at their recent 30th anniversary concert in New Jersey by The Killers members Dave Keuning and Mark Stoermer. Keuning and Stoermer have not played live since declining to tour with The Killers for their latest album Wonderful Wonderful in 2017, only returning for a one off Vegas Strong performance in December 2017. The exiled ‘other half’ of The Killers performed “Cherub Rock” and “1979.”

Stoermer toured with The Smashing Pumpkins in late 2014 and early 2015 to promote Monuments to an Elegy. Keuning is a longtime Smashing Pumpkins fan, even citing the band among his influences in the newspaper ad that led to him forming The Killers with Brandon Flowers in 2001. During Keuning’s final performance as a full time touring member of The Killers at Lollapalooza 2017, he and Flowers covered the Pumpkins classic “Disarm.”

It’s an ironic situation, as now Flowers and drummer Ronnie Vanucci find themselves in a situation similar to the Pumpkins a decade ago, playing with touring musicians in place of their original members.

Watch videos of the Pumpkins and Killers performance below.