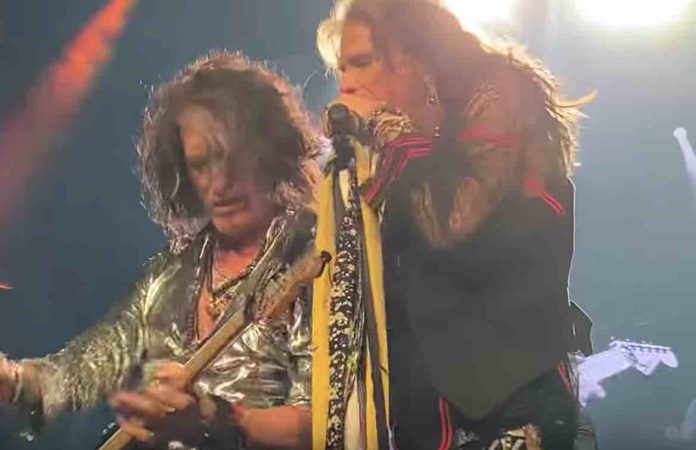 Falling in Reverse were forced to cancel a festival appearance. The announcement came after the members of the band’s touring crew misplaced laptops that were essential for the performance setup, according to frontman Ronnie Radke.

Sebastian Bach and Ronnie Radke get involved in controversy

The decision to cancel the show altogether instead of finding an alternative sparked some controversy among the group’s fans and peers, with SiriusXM’s Eddie Trunk addressing the issue. Bach was also involved in the back-and-forth war of words. Radke made an accusation about Steven Tyler and Aerosmith as well.

“This is astonishing… First I heard about this I thought it was a joke to wind me up. How much longer are fans, promoters, and media, just going to accept the epidemic of live rock shows… not really being live? Paying your hard-earned money to see a band play ‘live’ that’s not truly live?!”

“And there are countless bands in 2022 that hone their craft and play live! Tons! New and old !! Including the one that subbed for them in their slot, Jackyl . No laptop needed there! This is just unreal. But at least I give them credit for being honest. Wow. I am closer than ever to launching my own band. And I can’t sing or play a note .. simply amazing.”

Radke then replied to the radio host:

“@EddieTrunk so you wanna talk hella Shit about laptops but go watch kiss lip sync, Steven Tyler plays the piano then halfway through the song he stands on top of the piano while it still plays yet here we are acting like they all don’t use tracks you fucking idiot. Literal moron.”

The Falling in Reverse continued, sharing a video of Trunk introducing Bach’s solo band at a gig, and adding:

Bach then hit back, saying:

“Wow dummy are you trying to say that you believe that I use tracks on stage? @EddieTrunk how f****** funny is this”.

To which Radke fired once more:

“The fuck is your bitch ass gonna do? You disrespect an entire generation of people after you that use synths laptops and backing tracks all while using a fake audience on a track as you walk out, fuck you and fuck Eddie trunks bitch ass.”

“It’s always so much fun to show someone what the world was like before the internet existed get f****** ready. Virtual reality is so much fun until you have to deal with actual reality. In your face. Can’t wait to meet you in person. Name the time and the place and I will introduce you to rock and roll in person man”.

And the Falling in Reverse frontman seemingly concluded things by saying:

“What a fucking BUMMER this man that we all once loved is literally disrespecting an entire generation of bands. You got a lot of people that grew up listening to you you should be ashamed of yourself. Shit changes so do people the fuck is your problem”.

However, later on, Radke shared a video of Queen performing “Bohemian Rhapsody”, noting:

“@sebastianbach @eddietrunk and any other literal clown: I guess Queen isn’t real Rock since in 1986 they used full tracks to play bohemian rhapsody and walked off stage”.

And Bach closed the conversation, commenting:

Support for Radke and Falling in Reverse’s decision came from Mötley Crüe’s Nikki Sixx, who said:

“Keep beating that fake bullshit drum. Sounds so ‘Get Off My Lawn’. God forbid some artists use technology as a creative tool on albums and in live settings. I get it. Just open your mind and stop fighting reality. Makes you sound outta touch and I like that you fly the rock flag.”