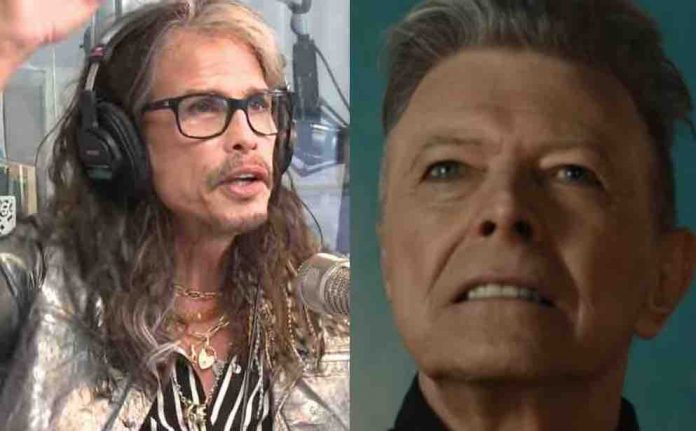 Aerosmith frontman Steven Tyler‘s ex-girlfriend Bebe Buell discussed being at a party with their daughter Liv Tyler and David Bowie in a new Ric Ocasek tribute article on Please Kill Me. Steven Tyler’s ‘bloated’ full stomach on Christmas was just revealed in a photo.

“Ric was a no nonsense, cut-to-the-chase kind of producer and he was very encouraging. He never lost his cool. I’m so glad I went through this experience with him. In some ways it was like losing my virginity—the freshness and newness of it made it one of the most memorable times in my life.

I never thought I could top it until David Bowie himself told me how much he liked the version of ‘Funtime’ we had created… not once but twice! Several years apart. He made a point of telling me again back in 2003 at a party for my daughter, Liv. It touched me deeply. To this day I still feel the rush. The rush of feeling good about your work.”

Steven Tyler discussing a woman ‘abuse’ claim was detailed earlier this week. HumoSuperious wrote on Reddit recently about David Bowie’s humble attitude, “David is always humble on the interviews and etc. unlike other icons such as Dylan and Jagger. Is it because he had a bad debut?”

Bowieisbae1 responded, “One of the most fascinating things I ever learned about Bowie was that when he was born, his midwife insisted that this child had ‘been on earth before.’ I believe it in a way, he had such a profound emotional depth and knowledge that most people don’t have even after an entire lifetime. I think he was humble because he knew there was always more to learn. Everything I’ve read about him seems like he was just eager to absorb more information. Just my thoughts.”

Loogria chimed in, “Jackpot. To me he is the kind that eager to learn, understand, create and tell, which he kept on doing until the very end. He always communicate with people under the emotions and assumptions within such personality, his humbleness is natural.”

You can read the full Bebe Buell piece at Please Kill Me.