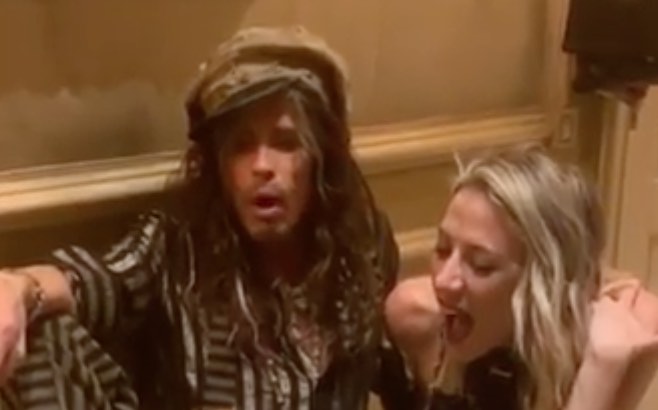 Aerosmith frontman Steven Tyler released a bizarre new video where he and his girlfriend Aimee Preston howl with their dog. Steven Tyler also recently made a bold claim about an earthquake rocking an Aerosmith show.

Tyler wrote on Instagram, “HOWLING AT THE NEW MOON… JUST ME AND HER AND THE #SUNDANCEKID.”

missysmailbox252 commented, “@iamstevent @theaimeeann How did you get your yorkie to howl? I gave 3 yorkies, and I’ve been trying this for years and they look at me like I’m crazy lol.”

kurt19 posted about a recent Aerosmith show in Las Vegas on the Aeroforce forums:

What a weekend! VERY cool to catch Steven and Paul blasting through Helter Skelter at T Mobile Arena. I am so very fortunate.

Saturday’s show was my second on this residency thing…first show was in April on the second night. What a difference a few months make.

While the April show was marred with technical glitches and band in-fighting (mostly Steven bitching everyone else out), this one was just about flawless.

Between the two shows, I have seen 23 different songs now so you won’t get any set list complaints from me. They ROCKED.

The first four songs absolutely COOKED with Train, SOS, Rag Doll and Last Child. Holy shit, I figured everything else would be the same from Sweet Emotion on but I was wrong. They did NOT PLAY IDWTMAT…well alright! Sucks to be all the uppity couples that used that turd as their wedding song!

Chip Away was INCREDIBLE in the encore spot…LOVE IT!!!

The band seemed to be getting along extremely well with a ton of smiles and personal interaction on stage. Sounds silly, but I could feel the love.

My seat may have been the best spot in the entire theater, directly up against the stage at the side of the point. I was able to high five/shake all five of their hands. Steven grabbed my hand and shook me so hard I just about fell down.

If you’re thinking about going…just do it.

Sure, its Las Vegas so you get your fair share of fair weather fans and rich morons, but this show is a real treat for the fans too.

If I could, I would go back again.