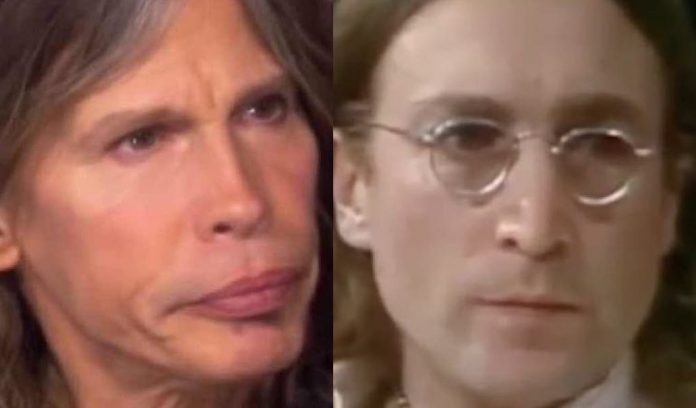 Aerosmith frontman Steven Tyler recently had his interview with Howard Stern played on a vacation show episode, and he discussed a surprising call he got from John Lennon’s widow Yoko Ono. Steven Tyler’s daughter being photographed with Brad Pitt was recently revealed.

MarksFriggin.com recapped: Howard said he liked Steven on the John Lennon tribute show. He said that was a great show. He said Steven must have loved The Beatles. Steven said he does. Steven said that he got the call from Yoko asking him to do that show and he did it. Howard said John Lennon was the greatest. Steven Tyler recently revealed how much he and his Aerosmith bandmates are paid per night at concerts.

After the Steven Tyler interview, Howard picked up the phone and said he had Joe Perry on the line. It was Sour Shoes doing his thing and singing an Aerosmith song. Howard said Joe can sing too. Howard asked him to do Mad Dog Russo singing that song too. Sour didn’t hear him because he was singing so loud. Howard said he had an idea for him but he’s lost in the song. Sour finally stopped singing and broke into Mad Dog Russo for a second before Howard hung up.

Howard took a call from a guy who talked about how great that interview was and how well the two of them work together. Howard said he told Steven he makes his job easy. John Lennon’s affair was recently revealed on his social media.