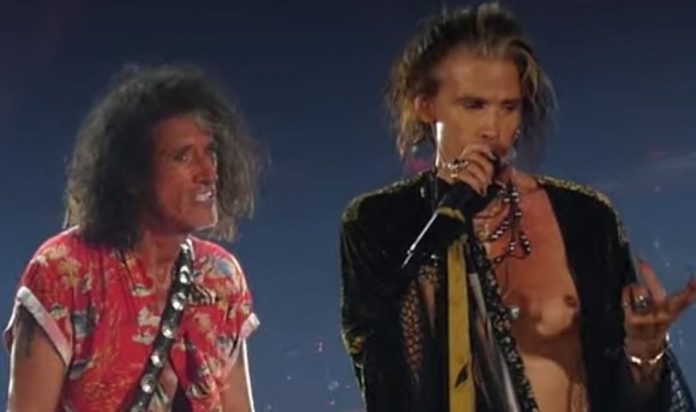 Aerosmith frontman Steven Tyler recently uploaded this video of himself playing some sort of percussive instrument in an embarrassing yet fun manner in preparation for one of his highly acclaimed ‘Deuces Are Wild’ shows in Las Vegas, Nevada. A post in which his daughter, Mia Tyler only could offer up a response of a shocked emoji face. Could Steven Tyler be pulling double duty in the near future? Steven Tyler ‘kicks out’ Aerosmith icon at bad show.

Fellow Aeroforce forum member Warmaker proclaimed: “I don’t really think so… They’ve been in the US for the last year (fine, mostly LV, but did some of this East Coast run). And after Boston, they will have been in Europe too, so that’s off the list too. It seems it would be a good time to go to South America for a while (remember they had to cut it short the last time), then perhaps some Japan/Asia tour with a few shows and then double back to the US. And that is when they might do some final shows there and eventually say goodbye.”

Aerosmith family rips Steven Tyler for ‘lying’ to fans. Whereas Pillis chimed in: “Vegas has changed the touring business, also because of stupid steaming which killed the digital sales and overall income. Money is in publishing/syncing and live entertainment so the industry is doing everything to cut the cost of touring.”

Other Aerosmith and Steven Tyler superfans commented to this forum post as well. SlashIsEnglish said I can’t see them just playing the one show in Boston. House Of Blues would be special and maybe a few other select cities on the East Coast”. While Bartman2001 put: “Why would they bother to tour the States? They are making money out the ass having fans come to them in Vegas. I frankly don’t see any incentive for them to do any kind of US tour.” Steven Tyler’s girlfriend leaks painful Joey Kramer photo.