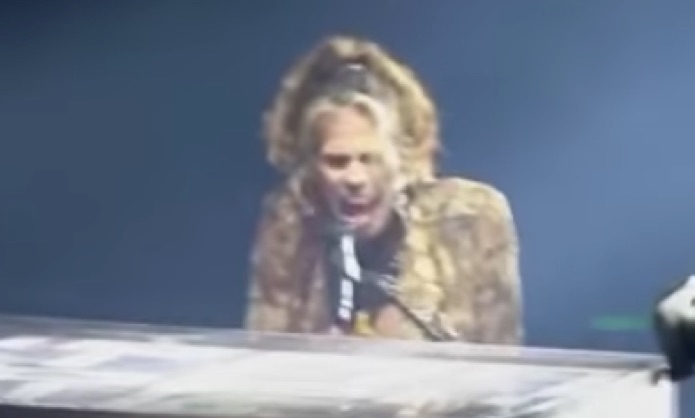 In a recent post on his Instagram page, Aerosmith frontman Steven Tyler recently claimed he was getting ready to watch the Super Bowl. However, there was only one problem with that – as Steven Tyler is on the west coast, you can visibly see that it’s dark out, so he didn’t really film this video snippet the day of. Steven Tyler’s girlfriend leaks painful Joey Kramer photo.

Acclaimed music photographer Zack Whitford pointed this other even further, singling out this lie on Tyler’s Instagram when he put: “We can see that it’s night, you know.” You can see for yourself below.

In other news regarding Steven Tyler and Aerosmith, fans recently took to social media to revisit one of Aerosmith and Tyler’s most beloved albums – ‘Get Your Wings’. One fan reviewed: “This was Aerosmith’s 2nd album, released in 1974. After I bought “Toys in the Attic”, my very FIRST Aerosmith album in the Summer of 1975, I followed up w/ “Get Your Wings”, as my 2nd album, in November of 1975. I love this album very much & it’s probably my top favorite recording by Aerosmith. Out of curiosity, I always wondered how “Train Kept a Rollin'” sounded, as I always loved songs about trains. My youngest sister used to say that I would know this song.

Even after, I bought this album, I played “Train Kept a Rollin'” as the first song before I even listened to the other 7 songs. And I still didn’t know this song, not even the version by the Yardbirds or even the 1951 version. But I really love “Train Kept a Rollin'” so much. It starts out slow, then the drums really pick up the speed & the song really speeds up…just like a train would. I also love “Lord of the Thighs”, “Spaced”, “Seasons Of Wither”, “S.O.S. (Too Bad)” & of course, the album’s opener, “Same Old Song & Dance”. These songs just mentioned, are excellent in my opinion. Steven Tyler’s daughter bends over in black lingerie photo.

The fan continued: “Woman Of The World” & “Pandora’s Box” are good songs, but they aren’t my favorites. “Pandora’s Box”, I do find rather humorous at certain times. Much to my embarrassment, I should have known that “Lord Of The Thighs” was about a pimp & a prostitute. The same meaning is kinda like that of “Uncle Salty” from “Toys In the Attic”. NOTE: You will notice my review about “Uncle Salty”, as I went quite into detail about the meaning & my opinion of that song. As with “Lord Of the Thighs”, I love it so very much & it has really unique music. “Get Your Wings” is so definitely recommended – it’s one of their best albums, in my opinion. Steven Tyler ‘ruins’ Joe Perry guitar solo in video.