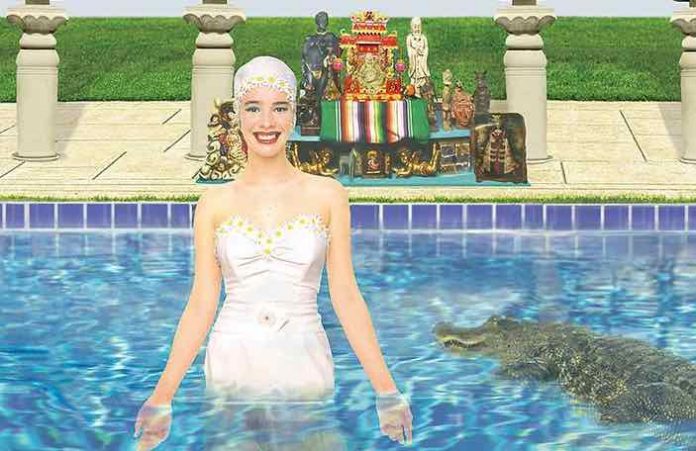 “‘Tiny Music’ by @stpband dropped 25 years ago today, with cover art by myself. This assignment changed my life. The album is being reissued today by @rhino_records, with a plethora of bonus musical content and more of my images. I’ll always be grateful to STP, their then-mgr Steve Stewart, and Atlantic Records A&R ace Angelica Cob-Baehler (RIP) for having me on for this, as well as several other subsequent projects. The making of the cover was a complex process, the idea originated w the band. The model was Maya Siklai (formerly Goodman), the daughter of Beth Goodman, a mutual friend of art director John Heiden @smogdesign and myself. Cathy Cooper did the wardrobe and Natalie Miller did hair and makeup.

The alligator was real, shot separately of course, which was a good thing, since it got semi-loose and the trainer had to struggle with it, knocking over a light stand in the studio. The goat legs came from the taxidermy collection of a San Fernando valley big game hunter – seriously.

The shrine in the bg was in Scott Weiland’s home, and was a late inclusion, at his urging. The pool belonged to the terrific photographer @markhanauer, who also loaned me his plexiglass box he used for underwater photos, so I could get the water stuff. The whole shebang was pieced together in Photoshop. The insert was designed as a 12 panel poster.

When you bought the CD, all you saw was the center panel with the model’s upper body – when you got it home and unfolded it, the entire picture was revealed. STP were the hottest band in the land at that moment. It was an exciting time, and I was thrilled to see this cover art all over the place, including on the hallowed front of Tower Records on Sunset Blvd.”