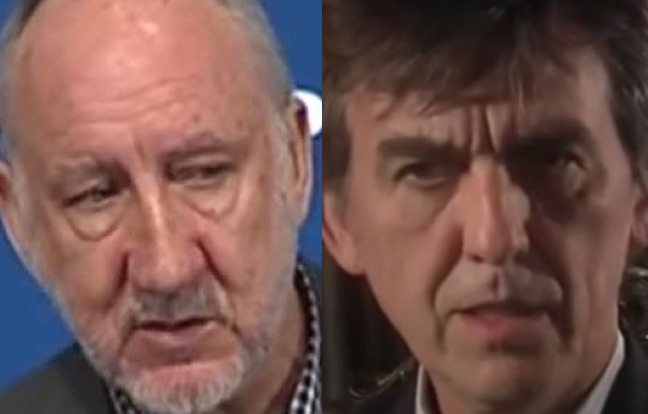 Pete Townshend, the acclaimed co-founder for The Who, recently spoke to the New York Times about a myriad of topics. Here, Townshend explains how he had a conversation with the late George Harrison about cocaine and how it could connect him with the Hindu deity Krishna. U2 savagely called out ‘depressing’ Pete Townshend earlier this month.

Townshend said: “I don’t want to go into this too deeply. I’ve been thinking about it. Last year I took a sabbatical, and during that time I did some quite special therapy. One of the things that I’ve realized looking back — I have photographs of myself as a child. I was so beautiful. I know all children are beautiful, but I was uniquely beautiful. My mother at some point made this huge mistake, which was to dump me into darkness. I came out of it — and I’m sorry to say this, but I came out ugly”

Townshend continued: “So with the question of identity, my work has been about trying to recover innocence and real beauty too. And if I can’t be beautiful, then I’ll create beauty, and if I can’t create it, I’ll get your attention by being angry, by being violent, by apparently not giving a [expletive]. But getting back to an earlier question, I think a lot of people went through the ’60s not trying to find themselves. I think a lot of us thought we already knew. I remember having a conversation with George Harrison about how he could reconcile following Krishna with his having to lay out lines of coke in order to talk about Krishna with me. Keith Richards brutally unloaded after The Who performance this past summer.

Townshend concluded: I can’t remember [what he said], but I do remember being convinced by his incredibly elegant answer! Anyway, I’d love to have a long conversation with Irvin D. Yalom about who I might be, because I am a man without a psychological backbone. That affects my work. If “Tommy,” for example, is a reflection of that plunging into childhood darkness that I mentioned, then one question that I ask is, Jesus, why did people like it so much?

In other news, fans took to social media to reflect on the legacy and impact of The Who’s landmark and signature album, ‘Tommy’. As one fan stated: “Great album. It is all a visual and musical journey, in the life of one of the greatest musicians of our time that presents significance, as well as musical quality and quality of performance. Five Stars.”

Whereas another reviewer wrote: “A classic and a must for anybody resurrecting a vinyl collection. This was a replacement for an original that became unplayable due to the decades of improper storage, two basement floods and the mildew that followed. It sounds fabulous, I would like to compare this to the original but not terribly interested now in pursuing a mint original.” Elton John made an emotional The Who AIDS announcement this past July.