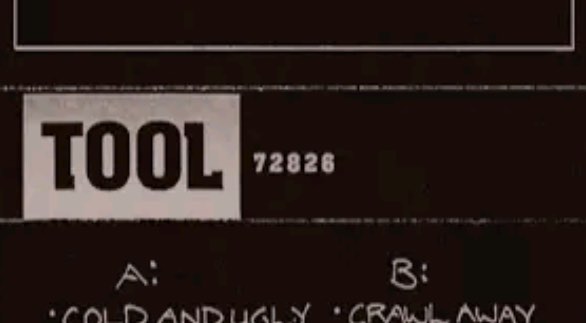 The first ever Tool demo EP from 1991 72826 was recently released on Apple Music, Google Play Music, and YouTube Music. It was released in 1991 in very limited quantities, probably between 100 and 2000 exist. It is also referred to by the name Toolshed, or Tool. The EP was later deleted from Apple and Google, but it is a sign that the band is finally coming to streaming platforms with Maynard James Keenan announcing that the new Tool album release date coming on August 30th. A Tool North American tour rumor was recently revealed.

Molanlabe2 posted on Reddit, “If you have an Apple Music subscription for iPhone, it doesn’t come up when you search Tool in the music app. I had to click the link above, and then click ‘Listen’ in the upper right hand corner. It then opened the Music app and allowed me to download it to my phone.”

yawaruk wrote, “The band recorded this demo themselves and handed it out at shows to start getting their name out in 1991. Opiate was their first professionally recorded & produced EP, then Undertow was their first full length album. 72826 is just early versions of their first written batch of songs which were fleshed out later on those two releases with a bunch of other tracks. You can tell these recordings are rawer takes with less details, etc.”

Decay commented, “This is great for introducing new people to them or for fans who don’t own their discography, but if you already have their releases, you can upload your personal library to Google Play Music (for now, at least). Not sure about Spotify, maybe it only lets you play from your local library. Uploading to GPM makes it available anywhere you have the app or sign in.

I have a lot of stuff that I uploaded, makes life a lot easier just using a singular app for streaming and my own library.”

Tool were in the news on Thursday, as Maynard James Keenan took a brutal shot at Justin Bieber after discovering he likes Tool.