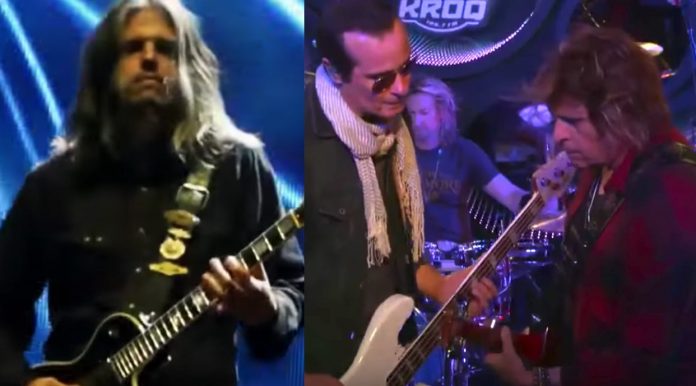 Tool, Alice In Chains, and Stone Temple Pilots brought the 90’s back to life over the weekend at the Northern Invasion festival. Tool guitarist Adam Jones had high praise for STP on Instagram, referring to them with the heart emoji. He wrote that it ‘seems like old times’ and a ‘time machine.’

See his full post below, followed by some comments from Robert DeLeo on STP’s new album.

Just fine, thanks. So tell me about the new disc; let’s start there. What were you looking to do at this point in the band’s career? Did you do anything differently? Did you approach it differently? Tell me the story of the disc.

“Well, you know, I think the intention was the same from the beginning, back, you know, 25 years ago [laughs]. I think it’s the same intention – just writing the best songs and just making the best … I’ve said the same thing over and over the years, and it’s been 25 now.

“It’s just, um, you know, really writing the best songs that we can write, and making a record a complete, fulfilling journey, you know?”

When you approached this album in terms of writing the songs, did you go into it with the idea that you would have a new singer, and tailor the songs to him? Or do write the songs and then work it out in the studio?

“Well, I think a good song is a good song, and that’s what makes it on the record. Or at least you think it’s good [laughs]. But I think it’s just a matter of also catering to what [new singer] Jeff [Gutt] brings to the song itself, as well as what [original singer] Scott [Weiland] would do, or [former singer] Chester [Bennington].