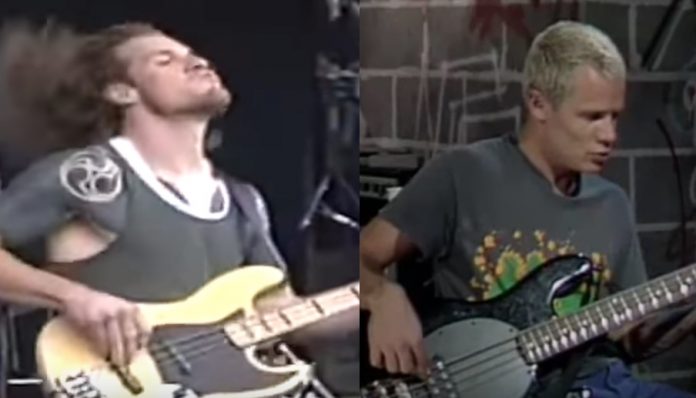 Ever wonder just who are the top 10 greatest alt-rock bassists to have ever walked the earth? Well, I have good news – today is the day you find out! And the info below has been compiled from my 24th book overall, entitled The 100 Greatest Rock Bassists, which you can find ordering info for by clicking here (in addition to the countdown in the book, you will find several exclusive interviews I conducted that will be of interest to fans of alternative rock n’ roll – Les Claypool, Mike Watt, Glen Matlock, Cris Kirkwood, Doug Wimbish, etc). Lastly, a friendly clarification – this is NOT the final “top 10” in the book, but rather, solely the alt-rockers grouped together. So, now that we have that out of the way…on your mark, get set, go!

With Bono’s vocals and the Edge’s distinctive guitar stylings absorbing most of the spotlight in U2, Adam Clayton’s simple-yet-effective basslines still managed to help drive things along. Case in point, such early classics as “I Will Follow” and “Gloria.” And as heard in such tunes as “Exit” and “Lemon,” Mr. Clayton could also certainly hold his own when the bass was required to stand up, front and center.

9. Tim Commerford (Rage Against the Machine, Audioslave, Prophets of Rage)

The main reason why RATM has stood the test of time was how utterly brilliant the instrumentalists in the band were – including their awesomely tattooed bassist, Tim Commerford. While there is no denying that he frequents the funk, it appears as though Tim’s main bass role model was Rush’s Geddy Lee – as evidenced by his penchant for playing Fender Jazz models and a Moving Pictures-esque tone at times.

When it came time for Tool to replace their original bassist, Paul D’Amour, they could not have picked a better feller than Justin Chancellor. Chancellor’s style can be described as alternating between repetitive and rubbery (and even a bit percussive at times) – a fine example of “the repetitive” being “Schism,” and “the rubbery” being the title track off their sophomore full-length, Ænema.

Fisher’s bass playing was obviously influenced by such ‘70s funk giants as Bootsy Collins and Verdine White. But by injecting his playing with the adrenaline surge of punk rock, Fisher’s playing on such classic Fishbone releases as 1988’s Truth and Soul is absolutely awe-inspiring – especially on the it-needs-to-be-heard-to-be-believed bass solo in the middle of “Bonin’ in the Boneyard.”

When you’re the bassist in a band with musicians who are impressively at the top of their game as Living Colour, it would be understandable to have difficulty holding your own. But LC’s original bassist, Muzz Skillings, had no complications at all – offering up first-rate funky and groove-heavy bass parts throughout their two most popular (and possibly, best) albums, 1988’s Vivid and 1990’s Time’s Up.

Doug Wimbish had some mighty big shoes to fill when he was asked to replace Muzz Skillings in Living Colour. But with a résumé that already included serving as part of the rhythm section on classic recordings for Sugarhill Records – including supplying the awesome bassline on “White Lines (Don’t Do It)” by Grandmaster & Melle Mel – as well as the experimental funk act Tackhead, LC couldn’t have picked a better chap.

Not very many funky bassists came out of the original CBGB’s scene in NYC circa the mid to late ‘70s (which was known primarily for punk rock). But the Talking Heads’ Tina Weymouth was certainly a notable exception.

While it is tempting to neatly say “the first bassist to merge punk and funk together was Flea,” this just isn’t the case, dear readers. A chap by the name of Mike Watt just may have been the first – as heard in his work with the Minutemen during the early/mid ‘80s, and later, as a member of fIREHOSE and as a solo artist (while a stint with Iggy & the Stooges erased the “funk” part of the equation).

A valid argument could be made that it was not until the Red Hot Chili Peppers’ Flea (real name – Michael Balzary) burst onto the scene in the mid-late ‘80s that the slap bass technique was finally fully accepted within rock music. Up to this point, slapping and popping was assigned almost exclusively to funk and dance styles. But with the group’s commercial breakthrough (namely 1989’s Mother’s Milk and 1991’s Blood Sugar Sex Magik), “punk funk” was introduced to the world, and did an absolutely swell job of merging both aforementioned styles together.

While the majority of other hard rock bands that injected funk into their sound at the time had probably only recently discovered the Red Hot Chili Peppers (and were suddenly trying to wedge Flea-style slapping/popping into their metal riffage), Primus’ singer/bassist Les Claypool did not focus on the technical aspect of it. Rather, rhythmic basslines were his main focus.

To order a copy of The 100 Greatest Rock Bassists, click here for paperback, here for Kindle, or here for the Nook version.