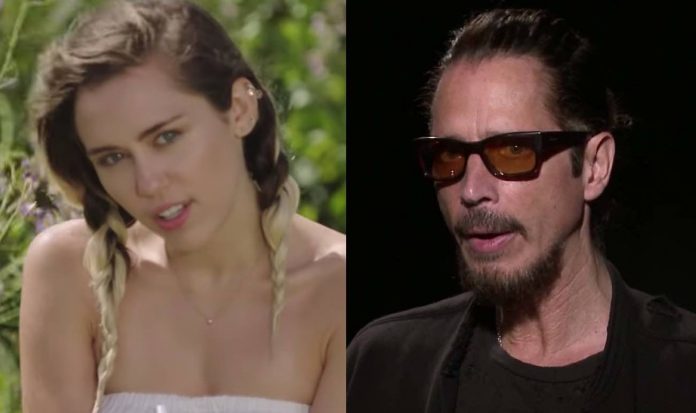 chriscornellfanpage15 has uploaded a rare photo of Chris Cornell and his daughter Toni with pop sensation with Miley Cyrus in 2008 or 2009.

Cornell and Cyrus never really talked about each other in the press, so there isn’t any known friendship or connection known to the general public. Miley does have some connections to Grunge though through her father Billy Ray Cyrus, who knew Kurt Cobain.

Cyrus told GQ, “I was supposed to go and do another world tour. I said no. I canceled my tour. Kurt Cobain had just died, and that really had an impact on me. He was one of those guys that became a friend to me that I never expected. We met at a venue one night, some big coliseum somewhere—his rig was pulling out and mine was pulling in—and I was standing in the shadows, 1 a.m. in the morning, and he’s ‘Hey man, congratulations—you pissed the whole world off.’ We shook hands, and I said, ‘Thanks, man… I love what you all do.’” After that, Cobain congratulated him at an awards ceremony when most of his peers did not. “We crossed paths a couple more times.”