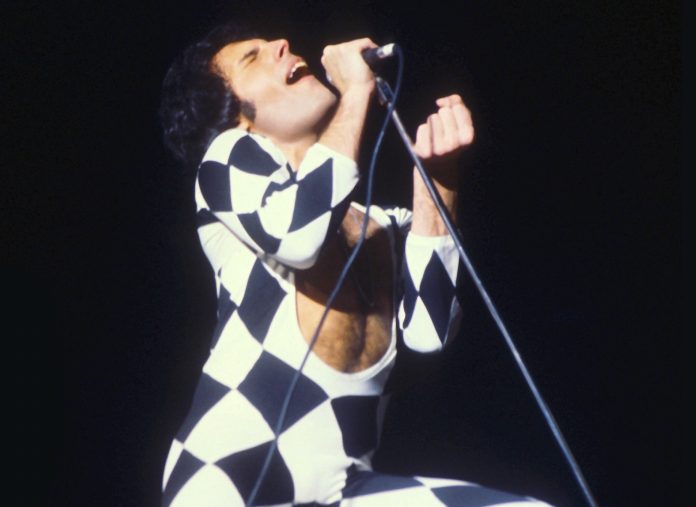 What better way to mark the release of both the Freddie Mercury/Queen biopic, Bohemian Rhapsody, and my 25th book overall, Long Live Queen: Rock Royalty Discuss Freddie, Brian, John & Roger, than by compiling Freddie’s 15 greatest performances that were captured on film (or, probably in some cases, videotape)? On your mark…get set…GO!

Queen tackled a multitude of musical styles throughout their career. And as stated by quite a few musicians in the Long Live Queen book, they may have helped create thrash metal, also. Give this early tune – later covered by Metallica – a listen/view and be the judge…

Throughout the years, Queen always made it a point to pay tribute to the forefathers of rock n’ roll – by covering such tunes as “Tutti Frutti” and “Lucille.” Here, they take on an Elvis Presley classic.

Years before such metal bands as Iron Maiden and Anthrax penned tunes about the plight of Native Americans (“Run to the Hills” and “Indians,” respectively), Queen offered this oft-overlooked rocker, which features Freddie’s incomparable vocals front-and-center at the beginning.

Although admittedly not the most extraordinary Freddie performance, what makes this special is that most singers wouldn’t be comfortable performing a song they had just recently rehearsed, in front of a stadium-sized crowd. But Freddie pulls it off (albeit with the aid of lyrics written on his palm) with a charming rendition of this Hungarian folk song.

One of Queen’s earliest – and most overlooked – ballads, mostly carried by Freddie’s fine vocals.

Queen’s 1982 album, Hot Space, was met with an extremely cool response Stateside, as the group’s hard rock fanbase had little patience for a dance-heavy album. But as heard on this rendition of the album’s opening track, the Hot Space material had more of a rock edge when performed live – which was sorely missed on the studio recordings.

Freddie always enjoyed involving the audience in call-and-responses, and one of the first Queen tunes to incorporate this bit of concert fun was this rockin’ ditty’s middle section.

When the song “Love of My Life” first appeared on record (1975’s A Night at the Opera), it was a lush ballad, complete with a harp! But it quickly became a live favorite as a voice/guitar version, and by the time of this rendition, most audiences would relieve Freddie of his vocal duties (momentarily, at least).

This feel-good party anthem truly took flight on stage, and has gone on to become one of Queen’s most popular tunes. Surprisingly, it was only performed in concert for a single tour with Freddie (in support of the Jazz album). Interesting factoid – in the Long Live Queen book, the singer of the New York-based Queen tribute band, Almost Queen, picked this song as one of the most challenging to sing live (“If you want to sing the lines he’s singing on the record, you’d better have a lot of breath”).

Filmed around the time that “Another One Bites the Dust” was conquering the US charts – the song’s funk/dance groove fills up a stadium quite nicely, with some attractive headgear being sported by Mr. Mercury and Mr. May.

The story goes that supposedly Freddie lost his voice the night before Queen was due to perform a pair of tunes on a Chevy Chase-hosted episode of Saturday Night Live, when he got into a screaming match with a boyfriend. Still, it’s one heck of a performance – with Freddie handling both his and David Bowie’s vocal parts. Sadly, Queen’s SNL appearance would prove to be the band’s last-ever live performance on US soil with Freddie as their frontman.

Few rock singers have been able to engage crowd participation as well as Freddie. Here is the master doing what he did best on stage, on his final tour with Queen.

Out of all the times this tune (arguably Queen’s best-known) was filmed/recorded live – this one just may feature Freddie’s finest vocal performance of it.

Could there be a better song to perform in front of an audience of over 130,000 people at the inaugural Rock in Rio Festival…while sporting a bad-ass mullet wig? [Although a close-call runner-up was Freddie singing the tune atop Superman’s shoulders]

The #1 selection can’t be much of a surprise, as it has gone on to become widely known as one of – if not the – greatest rock concert live performance of all-time. And to think that Freddie and company accomplished it on live TV (shown to millions around the world) AND on a bill that included such legendary rockers as David Bowie, U2, the Who, Elton John, and Paul McCartney, makes it all the more impressive.

You think you’re cool? Well, can you say that you are “Freddie Mercury making his way to the concert stage with Michael Jackson and Billy Squier in your entourage while Journey’s ‘Don’t Stop Believin” plays in the background cool”?!