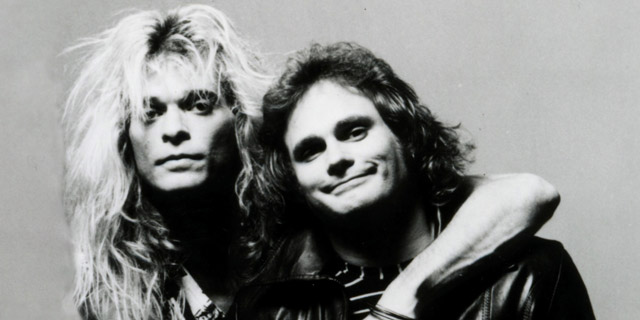 He responded: “I have people after me all the time about stuff like that. Obviously, somebody wants to get another perspective from one of the original Van Halen guys on all the dirt from the band, and I don’t know if I’m ready to come out with something like that. Obviously, it wouldn’t be the dirt like some people would wanna hear it, because I’m not that kind of person.”

He added: “A lot of stuff that went on back then is what is understood, between the band, it’s the secret brotherhood of ‘what’s on the road stays on the road’-type stuff. But I think possibly at some point I’ll probably do something; I’m just not really ready to do it quite yet. I also have a couple of people after me to do some recipe books with my hot sauces too, which I’ve kind of been thinking about. I really don’t have the time to write at the moment, but I wouldn’t mind doing something like that too.”

When Paltrowitz asked Anthony if that means that a book from him “in some form, whether it’s about Van Halen or recipes, is very, very likely,” Michael responded: “I don’t know [about] ‘very, very likely’ — somewhat likely. When I slow down a little bit to find the time to actually do it properly.”

Darrin Stephens recently posted on VHLinks.com about the rumor of David Lee Roth and Alex Van Halen putting together a Van Halen tribute tour with Joe Satriani, “Heading off for 420 but some facts on Mike. Al did indeed agree with a full reunion. Mike was scheduled to play with Dave Jan. 10, 2020 in Vegas but scheduling in Hawaii meant he could not. He agreed to appear again with Dave in Vegas this year before it all got cancelled.

While some may not like the company he keeps and hence not the very first call made it does not mean folks are pissed with Mike or vice versa. There is no need to create drama around that. As I said IF the exploration moved forward I would be shocked if anyone but Mike was on bass if he wanted to do it. The exploration did not get that far and as of today is still not viable but not because of any drama among members etc…. Could that ever change sure but unless it does if you have expectations you likely set yourself up to be disappointed. Speculate away and a lot fun hypothetical places to run with but barring changes Al is horses and Porsches and Dave is indeed retired exactly as he told all.

Have a great week all.”