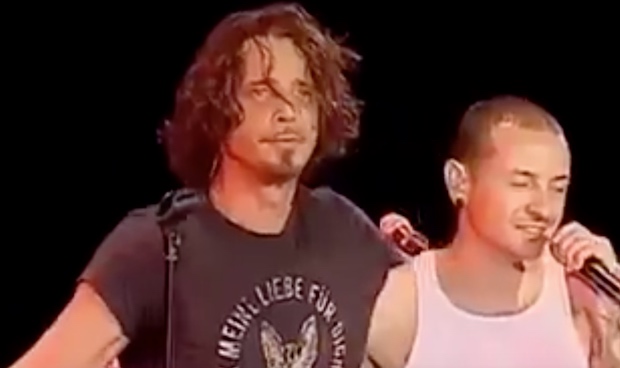 Late Soundgarden frontman Chris Cornell’s widow Vicky Cornell has shot down reports that her husband was working on a pedophile exposing documentary with late Linkin Park singer Chester Bennington before they died by suicide in 2017.

Vicky said, “FROM THE WORLDS MOST TRUSTED NEWS SOURCE. Fact check: Avicii, Bennington, Cornell and Bourdain were not working on a child sex trafficking documentary and did take their own lives – Reuters.”

Cornell and Bennington were good friends, with Chester singing “Hallelujah” at Cornell’s May 2017 funeral. Bennington died in July 2017, with Chris’ daughter Toni Cornell then performing her own version of “Hallelujah” on Good Morning America to honor her father and his friend. Cornell first befriended Bennington was opening for Linkin Park on the Projekt Revolution tour in 2008, with the two sharing the stage together.

Vicky also recently responded to a fan telling her that after her late husband’s statue was vandalized in Seattle, it was clean up quickly by ‘super cool’ people in the city.

Vicky stated, “There are many super cool Seattle people. My husband being one of them, three of my best friends also from Seattle. Please stop hate – hate is what caused his statue to be vandalized.”