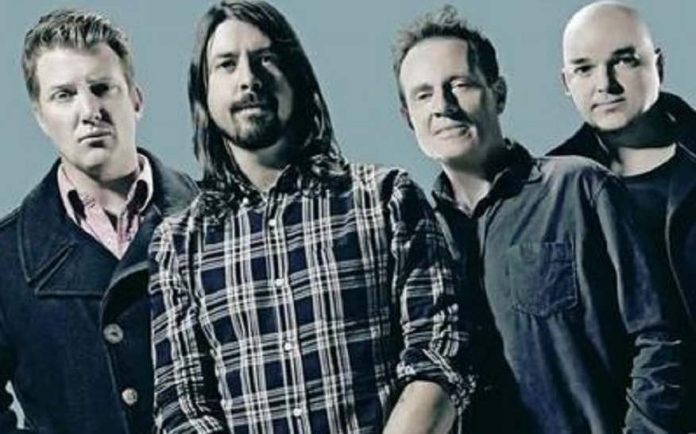 Foo Fighters frontman Dave Grohl played with his ‘Dave Grohl and Friends’ supergroup on Saturday night in Asheville. They performed his 23-minute song “Play”. He also played with Warren Haynes. Watch video of “Play” being performed below.

Grohl played with Alain Johannes in Them Crooked Vultures. Johannes was also a member of Queens of the Stone Age and Chris Cornell Band. Chris Chaney is the bassist of Jane’s Addiction, Barrett Jones recorded some of Dave Grohl’s earliest work, and Greg Kurstin produced Foo Fighters’ latest record Concrete and Gold and is a member of The Bird and the Bee. Jason Falkner has played with Jellyfish and the Three O’Clock, while Drew Hester has played with Foo Fighters, Jewl, and Chicago on Percussion, and he has drummed with Joe Walsh, Stevie Nicks, and Beck.

“We do talk about it,” Dave Grohl said regards to a reunion of Them Crooked Vultures in a 2017 Beats 1 Radio to promote Foo Fighters’ new single “Run.”

“Every once in a while, you’ll be up at night drinking a bottle of wine by yourself, and you’ll watch some Crooked Vultures live thing on YouTube and go, ‘We were so good!,” and then we’ll text each other saying, ‘Miss you man!’”

Queens of the Stone Age frontman, and former Them Crooked Vultures frontman, Josh Homme performed an acoustic set in Los Angeles in December 2016 at the Teragram Ballroom as part of a benefit concert for Afghan Whigs, Twilight Singers, and Gutter Twins member Dave Rosser. Homme revived the catalog of Them Crooked Vultures by performing “Spinning in the Daffodils.” Them Crooked Vultures, which also featured Dave Grohl and John Paul Jones, released their lone self-titled album in 2009. The band last performed live on July 30, 2010 at the Fuji Rock Festival.