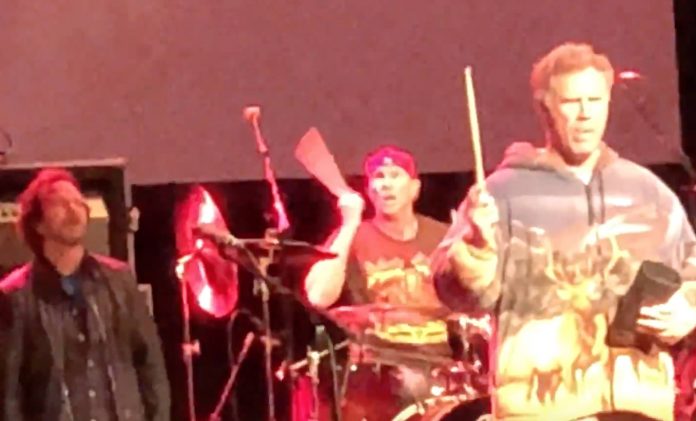 We reported on the announcement for One Classy Night in Seattle back in November:

Will Ferrell, his doppelganger Red Hot Chili Peppers drummer Chad Smith, Pearl Jam guitarist Mike McCready, and Brandi Carlile will unite on February 12, 2018 at the Moore Theater in Seattle to form a one off comedy/music supergroup at ‘One Classy Night In Seattle.’

An event description says: “King of comedy Will Ferrel bands together some very special guests for a night of musical chit-chat and live rock-n-roll, in support of the Cancer for College charity. On this special evening Brandie Carlile, Mike McCready of Pearl Jam and Ferrel’s doppelgänger Chad Smith of Red Hot Chili Peppers will come together in a lively discussion about the music, performers and songs that have shaped their careers.

Expect a night full of anecdotes as the group share their personal memories and experiences from their careers all whilst jamming some of their favourite songs in a special live performance.”

Chad Smith tweeted, “Hello Seattle! A night of music with some of the best people around supporting a great cause. I’ve never felt more classy!”

Tickets cost $125 and can be purchased on Ticketmaster.

Hello Seattle! A night of music with some of the best people around supporting a great cause. I’ve never felt more classy!
Tickets on-salehttps://t.co/r7U3OiF7ty pic.twitter.com/v4E6hj4sFE