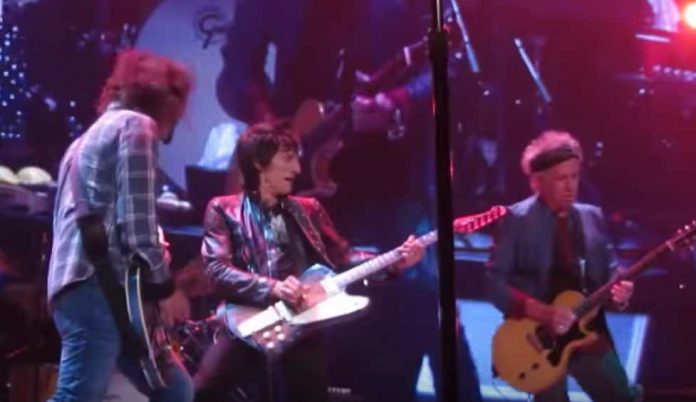 “Keith always has a go at me when I wear one!” he says of his friend and fellow Rolling Stone, Keith Richards. “He says you can’t wear a mechanical watch near a [guitar] pick-up because it affects the sound.” He huffs. “No it doesn’t!” But he finally concedes: “I actually don’t wear one on stage because it gets in the way of playing. I am more of a collector.”

Chacho posted on IORR.org, “I was under the impression Keith was really into watches; had been known in the past to actually wear one on each wrist; and once got himself out of a predicament when he was in a broken down speedboat by paying the boat owner who towed him to shore by giving the owner his gold Rolex. However, it is true he never wears a watch on stage. I do not know why on that one.”

Keith Richards ‘forgetting’ how to play a song was just revealed. JBWelda responded, “He got taken. Boaters routinely tow disabled craft back to port as a matter of courtesy to and empathy with fellow boat owners (there but for the grace of God go I), or as a potentially life saving act. Either Keith didn’t give a crap about the watch and just gave it to him as unnecessary reciprocation, or he got fleeced because of his celebrity. First world problem for sure.

Personally I would just ask for an autograph and maybe a photo. But I guess that’s why I am poor and wear a Seiko.”

DoityWoik commented, “Hmm, maybe Clapton said he liked Prince which made Keith angry, he knocked him out and took his watch to remind him to never again talk such bollocks?

On a more serious note, I saw McLaughlin a couple of times, he always came on stage wearing his watch but before he started to play he took it off and put it on his water table or else, and when the show was over he put it back on before he left the stage. Maybe that’s the secret of speedy guitar playing: take off our watch! Have you ever seen a long-haired, well-tattooed, naked-torsoed speed metal guitar player play with his Rolex or Triple Split around his wrist?”

You can read the full interview at Financial Times.