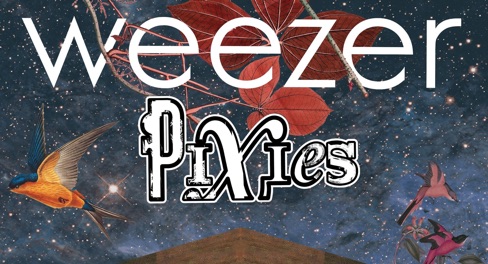 The BB&T Pavilion in Camden, New Jersey set the stage for  two alternative legends- Weezer and the Pixies- to deliver a handful of surprises and one of the best rock bills in recent memory. Sharp wind propelled the near constant, steady downpour of rain into a diagonal motion, slashing down on eager concert-goers most of the night.  The lawn was an even fifty-fifty split between grass and mud and even for those unfortunate souls who slipped in this makeshift slip-n-slide, they wouldn’t have traded placed with the folks under the pavilion if you paid them.

With the harder the rain came, the darker the sky got and the chillier the air felt, anticipation of the audience only seemed to grow. A palpable energy ran through this multi-generational crowd. Feeling more like October than July, nothing was going to get in this crowd’s way. I really can’t stress this enough. This was without a shadow of a doubt one of the most energetic crowds I have ever been part of. And considering the elements that day and how easily the misery of the weather could have taken center stage, it speaks volumes to the absolute magic of Weezer and the Pixies.

With the rain at its heaviest, a haunting wail burst through the PA system, followed by a few more. A roaring enthusiasm and cheer ran through the crowd and by the last wail, the audience was fully with bassist Paz Lenchantin as Black Francis, the enigmatic frontman and leader of the Pixies began strumming the opening chords to “Where is My Mind?” In her role with the band, Lenchantin has more than held her own as the replacement for co-founder Kim Deal. Lenchantin got plenty of moments to shine throughout the night but it was on “Gigantic” where both she and the rest of the Pixies truly caught fire.

The Pixies set was all business. Not much crowd interaction- save for Lenchantin thanking the crowd for coming out in the rain- but nonetheless, with the anti-rockstar ideology they helped launched, Black Francis and the gang don’t wear this type of being as a badge of honor like many bands that followed in their wake. There is a pureness to the way they exist. There is no put on. The only thing that matters is the music. And with killer performances of classic songs, “Here Comes Your Man”, “Isla de Encana” and “Wave of Mutilation”, the Pixies came, they rocked and they conquered.

The continuous drop of the temperature couldn’t drop the insane buzz that followed the Pixies in anticipation of Weezer. With the rain letting up and the sky now completely dark, the PA system began playing Al’s speech from the classic Happy Days inspired music video for the band’s monster 1994 hit, “Buddy Holly”. And just as in that video, when Al (of Al’s Diner) said, Kenosha, Wisconsin’s own, Weezer, the band exploded into the aforementioned track. Armed with his black, thick-rimmed glasses, a sweater vest and his classic sticker-laden blue Strat, leader Rivers Cuomo led the band- and audience through a wonderful sing-along where at times, the entire band was nearly drowned out by the insane singing from the crowd.

Similarly to the Pixies, Weezer didn’t spend a lot of time talking to the crowd- at least initially. Rivers Cuomo, drummer Pat Wilson, bassist Scott Shriner and guitarist/keyboardist Brian Bell blazed through eight classic Weezer songs, “My Name is Jonas”, “Beverly Hills” and “Hashpipe” to name a few- each coming with more energy from the band and more rabid responses from the crowd. When they wrapped up “El Scorcho” the alternative rock classic from their brilliant 1996 sophomore album, Pinkerton, Cuomo addressed the insane crowd. “You ready for Weez?” he asked to a sea of claps, hollers and laughs. “Let’s take this back to the garage,” he said as the band launched into “In the Garage.”

One downfall to being as prolific as Weezer is the difficulty of fitting as many songs into the set as you would like. Somehow though, Weezer serve a pretty healthy amount of songs throughout most eras of the band while still throwing in an insane amount of surprises. Their 1994 debut album, the eponymous Blue Album has the most representation with six songs played off the ten-song album. But deservedly so.

Weezer treated the audience to the first of a few covers with “Happy Together” by The Turtles. Weezer is so 90’s yet they possess an American pop sensibility reminiscent of pure 60’s melody driven, rock(ish) music. Weezer seized the opportunity to combine their love of both of these eras when in the middle of “Happy Together”, they sneaked their way into the Green Day classic “Longview” for a verse and chorus before coming back to The Turtles. Brilliant. And the crowd exploded.

The undoubted highlight of the night was when Cuomo, in  a full sailor-captain outfit, made his way to the B Stage with nothing more than a microphone and an acoustic guitar.  Along with the crowd, Cuomo performed a heartfelt rendition of the band’s huge hit, “Island in the Sun”. In an age where musicians like the Misfits and Jack White are making headlines for their policy on cell phone use at their concerts just as much they make headlines for their music, it was refreshing to see Cuomo encourage everyone to light the pavilion and lawn with their cell phones as they all sang together. Cuomo then asked permission to play one of his favorite songs of the 80’s- “Take On Me”, which the crowd sang joyfully with him as well.

Cuomo returned to the mainstage now with a black sleeveless Nirvana tee shirt and a Flying V guitar. The band brought their set to a close with a few more hits and a bombastic rendition of “Africa” by Toto. Weezer disappeared shortly before coming back to close the night out with the one-two punch of “Surf Wax America” and “Say It Ain’t So”, ending the night of rain, wind and rock on the highest of high notes.

Weezer and the Pixies delivered not only the goods, but a good reminder to the glory of alternative rock. And even though everyone in that amazing crowd may not be able to speak for the days to follow, any pneumonia or flu that follows is well worth it thanks to these two glorious bands!