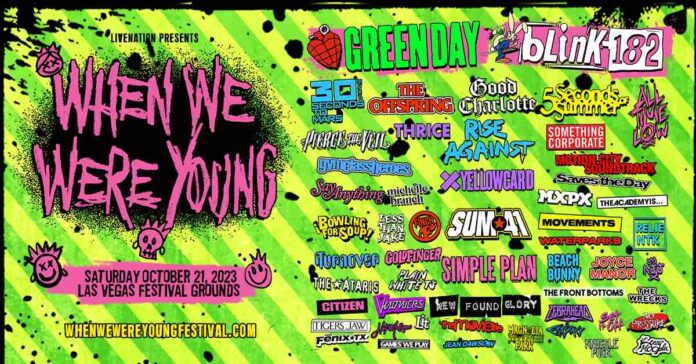 Matt Skiba accused the When We Were Young festival, which next year will feature Green Day, Blink-182, and Alkaline Trio, of not having anybody booked when they announced the show. He compared it to the infamous Fyre Festival, except that it worked.

Skiba told Vulture, “You want to hear something? Whether I’m supposed to, or not supposed to say anything, I guess, is immaterial. It makes the conversation more fun. But that festival — initially, they announced all those bands playing before anybody said yes. It was a Fyre Festival kind of stunt that worked. And I only know that because my band was on that initial flyer, wih every other band from our whole ilk. And they almost expertly started advertising it before they had a single band on the bill. And somehow, all the bands agreed to do it. I’m not making this up. Somebody may correct me, but I know that Alkaline Trio, we hadn’t confirmed anything. And when we read that, we called other bands that were playing, and nobody knew about it.”

He added, “If that’s an accident or a fluke, then it’s like two particles of sand meeting each other in space. It had to have been planned. And they weren’t wrong. Whoever did that, I’m not even mad. You took a shit in the fridge and ate the whole wheel of cheese? I’m not even mad. It’s like, holy shit, dude. Congratulations to whoever masterminded that, the Lex Luther of promoters. And I think everybody, including us, is really pumped about it. It’s going to be a great time.”

My Chemical Romance headlined the first year of the Las Vegas based When We Were Young festival this year.