Pearl Jam frontman Eddie Vedder volunteering singing with The Who in a rare handwritten note has been revealed in a new charity auction on JuliensLive.com. Billy Corgan made a heartbreaking Eddie Vedder claim a few days ago.

In the note, Vedder told Townshend, “If you have any interest in doing a ‘number’ or need a backing vocal, opening act, I’m here. I’ve got references. Ha. Ring me or have [illegible] ring room 2310.”

The auction states, “An Eddie Vedder handwritten note to Pete Townshend. Dated June 3, 1997, with a hand drawn yin yang symbol at the top of the page and signed ‘Love, Eddie.’ Accompanied by a Ritz-Carleton envelope and a certificate of authenticity stating that the item was sold at Pete Townshend’s ‘Auction for Oxfam’ in 2000.”

The note sold for $3,437.50. The Who, Neil Young, and Eddie Vedder also auctioned off a signed guitar. The description states, “A Palmer acoustic guitar, model number PC806, signed on the body in black felt pen by members of The Who: Roger Daltrey, John Entwistle, and Pete Townshend; additionally signed by Eddie Vedder and Neil Young. Proceeds from the sale of this lot will benefit MusiCares and Nordoff Robbins.”

The guitar sold for $1,950. That actually seems like a bargain, you would think that would sell for more than Eddie’s note to Pete, especially with John Entwistle sadly no longer being with us. Eddie Vedder opened up for The Who in London last summer on their European tour. Eddie Vedder just broke his silence on a fired Red Hot Chili Peppers member. 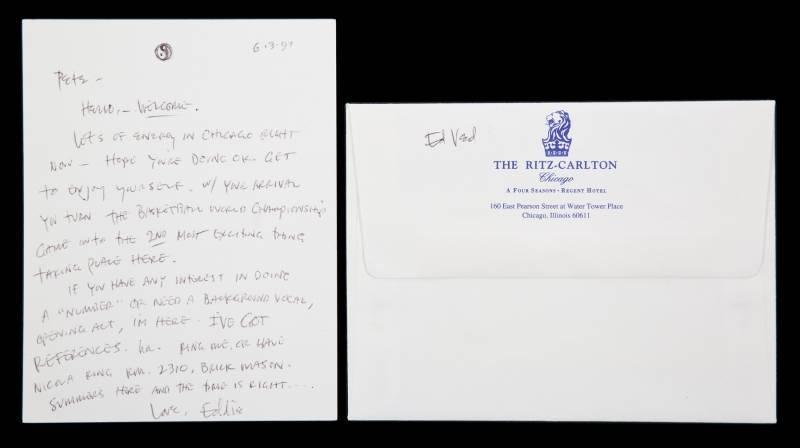