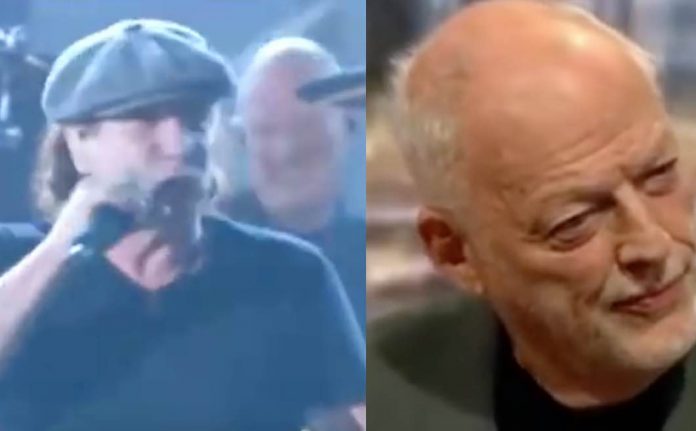 AC/DC drummer Chris Slade revealed that former Pink Floyd singer/guitarist David Gilmour is ‘special’ in a new interview, but sadly couldn’t call him the best guitarist he’s ever played with. A Pink Floyd icon recently admitted to lip syncing in a video.

La Verdad asked, “Jimmy Page, Angus Young, David Gilmour, Gary Moore … Who is the most talented musician you have ever played?”

Slade responded, “I couldn’t tell you just one. Everyone has their own special talent and I appreciate them all.”

AC/DC fans on ACDCFans.net recently discussed the rumored new album featuring Brian Johnson, Angus Young, Cliff Williams, and Phil Rudd. MyCubiclePenguin posted, “I just want them to put out a record that they know is the last, because that overall feeling in the songwriting/performances might come through to the listener more.”

An AC/DC icon recently revealed if his reunion tour felt ‘dead.’ 900 responded, “An interesting angle, Penguin, but I’m not sure it’s their style to try and give any hint of reference to it being their “grand, final album”. And I’m not sure it would really work that way anyway, as creativity just can’t be forced. Of course, if they got Mutt Lange and he directed them and corrected all the faults of the last few records, got the lyrics going again, fleshed out the arrangements….well that could be awesome (even though the Mutt sound isn’t necessarily my personal favourite).”

MyCubiclePenguin shot back, “Very true. As I said, I know they aren’t all about sentimentality/anniversaries/etc… and of course creativity comes when it comes, but I would only hope that they would try to make a big bang at their end. Perhaps that could be why the Vancouver stuff was dropped – they didn’t want that to be the end. That seems highly doubtful to me, though.

My thinking is that they know this is the end – Cliff wanted to retire, Brian isn’t getting any younger. Who knows for Angus, though. Who knows anything anymore. Maybe we’ll get a deathbed confession from Angus that he left the stove on or something like that. At least that’s SOMETHING.” An AC/DC icon recently revealed a ‘nonsense’ Angus Young demand.

You can read the full Chris Slade interview at La Verdad.