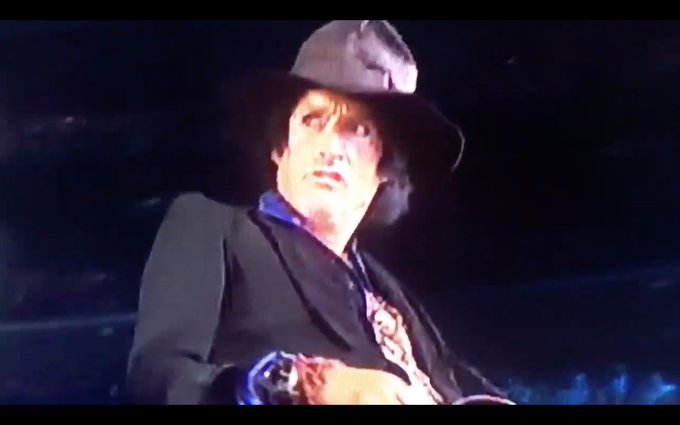 Sad Joe Perry news! On Twitter recently, the account gpdhln uploaded this video snippet from this past week’s Grammy Awards in which Aerosmith performed. Here you can see Joe Perry’s legendary guitar work during a solo being interrupted by Steven Tyler who cut in to sing in the middle of it and Perry does not look too pleased! You can check it all out below. Joey Kramer ‘skinny’ photo stuns Aerosmith fans.

In other news regarding Joe Perry and Aerosmith, fans took to the group’s official Facebook page to react to the news that the band will be playing their fiftieth-anniversary show on Friday, September 18th, 2020 at historic Fenway Park in Boston MA. Karen wrote: “You make me feel better as I thought it was just me. I saw Aerosmith this past Summer and they were beyond fabulous but for what those tickets cost they should be fabulous. It was a Trainwreck last night but hopefully, get back on the track to being awesome. Love Aerosmith.”

While Kathy responded: “The performance last night was bad. But we saw them last year in Springfield and it wasn’t much better … Tyler came out and said Hello Boston.. 1st mistake
Then there were huge teleprompter’s in the back of the arena – and he still forgot the words! Hope they practice hard for the hometown crowd.” Howard Stern recently made this Aerosmith breakup announcement.

Derek mused: “My question is: will this show cater to mainstream or hardcore fans? If this is going to be a set of hits and plenty of deep gems from throughout the years then I would love to go. If it is going to be the same 12 or so songs I’ve heard 13 times… less interested and feels like less of a fiftieth-anniversary show. The last time they played Fenway I didn’t go and then saw the setlist and was happy I didn’t. Not that I don’t love hearing those songs live – I just don’t need to hear them live again… (except maybe Sweet Emotion, my favorite of the “big hits”). Just in my honest opinion.”

The fan later continued: “I was seriously bumming that I was missing “Kings and Queens” at the Vegas residency. After seeing them thirteen times over the years, that’s the one favorite song I have missed hearing live. They have taken it off the setlist it looks like.” Steven Tyler just ‘refused’ an Aerosmith tour idea.