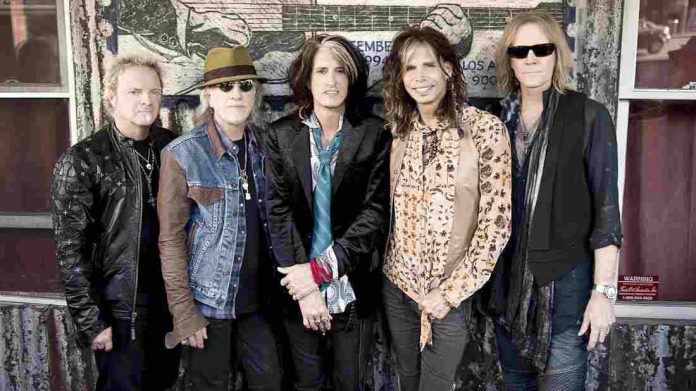 Over on the Aerosmith fan forum, Aeroforce, fans recently reacted to the news that the group invited drummer Joey Kramer to the upcoming Grammy awards without any intention of him playing during their highly-anticipated performance. Steven Tyler ‘Looks Like Woman’ In Sad New Photo

In a statement to TMZ Aerosmith stated: “We would be doing a disservice to Joey, to ourselves and to our fans to have him play without adequate time to prepare and rehearse. Compounding this, he chose to file a lawsuit on the Friday night of the holiday weekend preceding the Grammys with total disregard for what is our limited window to prepare to perform these important events. Given his decisions, he is, unfortunately, unable to perform but of course, we have invited him to be with us for both the Grammys and our MusiCares honor. We are bonded together by much more than our time on stage.”

Forum user Pillis responded to this and gave some additional insight by proclaiming that this could allegedly be a ‘staged stunt’: ” What the **** am I reading?! I hope this is just some staged drama to get some buzz. Because I think it’s totally understandable from the band’s behalf to put Joey on hold until his playing is OK. And it’s also OK for Joey to feel pushed aside but suing? Come on! Aerosmith is a multi-million dollar company, no one is allowing a member on stage unless he’s capable. I know that drumming is hard but you can’t expect the band playing 13 songs to accommodate joey’s health status. I would be totally disappointed to see the band without Joey but insure that he’s gonna be back in time for the summer.”

Steven Tyler ‘refuses’ Aerosmith tour, is he quitting? The user continued: “Anyway I think he might sue for promoting the Vegas shows with his meet and greet and his name while he was absent and nothing was said about it. That was definitely worse. Grammys are in a few days, I bet he’s gonna play and they’re gonna hug in front of everyone to make a statement so the press will talk. I mean they have good management for these kinds of things. I smell a publicity stunt. I hope”

The forum user also posted potentially one of Kramer’s final shows commenting: “This is fishy it says he also needed a check at the hospital in November. Apparently he tried to get back before that date. Of course, he wants to be there for the Grammys and the music person event. Those are unique moments he clearly needs to be there even if injured he could join the stage afterward but if he says he can play of course that would be humiliating. To be honest, this gig sounds off, they messed up during stop messing around and even edge sounded like shit. I don’t know if it’s because of Joey unable to keep up the tempo but that’s not Aerosmith at its full potential.”