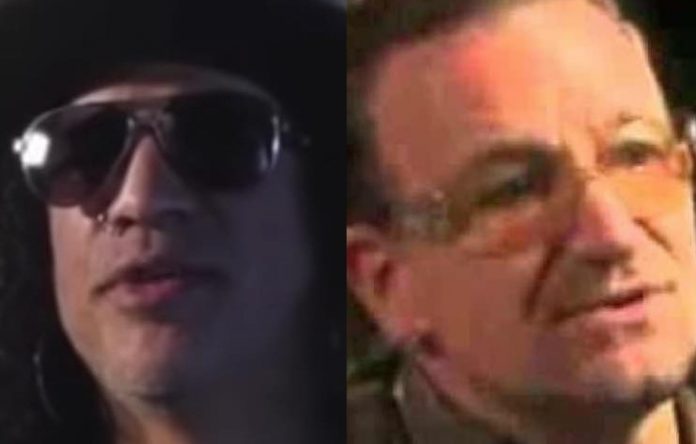 Guns N’ Roses guitarist Slash, recently was interviewed by Guitar.com about his new line of Gibson guitars and threw shade at legendary U2 frontman Bono in the process! Slash proclaimed: “One of the problems I had with some of the USA guitars a while back was I felt like there wasn’t as much focus on the way that they were set up. Not because the USA guys were putting them together wrong but I think it was just a general disillusionment that it developed over time, and you could tell that maybe they were not as enthusiastic about it as they are now.” Slash’s girlfriend recently leaked this Dave Grohl backside photo.

The iconic guitarist continued: “This is one of the iconic things in pop culture, y’know? It’s like Fender doesn’t need to play around with the Strats! If you want to have one line that’s totally out of the ordinary, it’s great, but to take the whole company and sort of set it in this direction… There was a time when if you went into a guitar store and you wanted to buy a new Les Paul, you had to have the robo-tuners. And that was not really what people wanted – it’s sort of like Apple when they stuck that [U2] record in your phone! That’s not how the guitar is supposed to work!” Slash revealed this ‘heartbreaking’ Neil Peart death photo earlier this month.

In other Slash news, fans recently took to social media to discuss one of Guns N’ Roses most legendary albums – Use Your Illusion. One fan said: “I grew up on GnR so I remember when Use Your Illusion I & II were released everyone got a copy. Now I get to own this on vinyl which is a great addition to my music room. Personally I like to Use Your Illusion II more since that has my favorite songs. Now on the pressing side. Mine did come with a slight warp and a few minor (barely detectable) surface defects but nothing really terrible. It seems thee days labels will spit these out as fast as possible with little QC. However, at the end of the day, it’s all about the music so grab a copy!” You can read the Slash piece at Guitar.com.