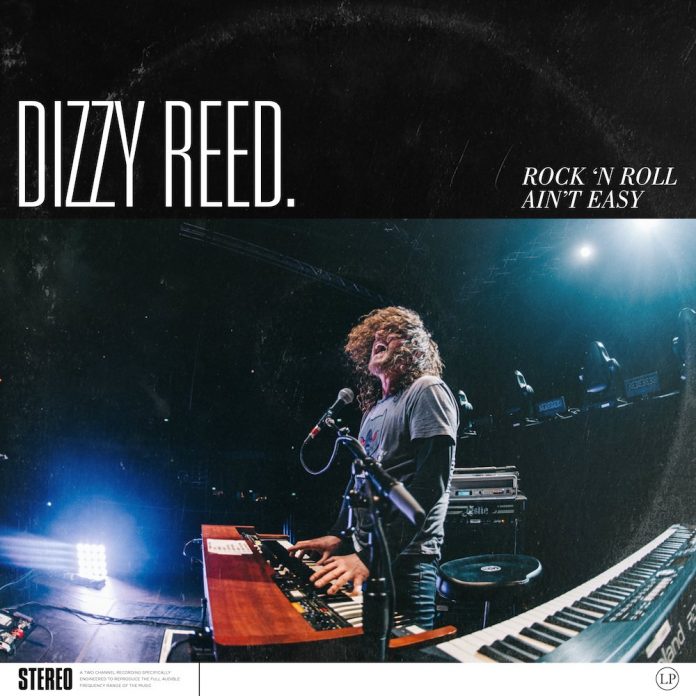 It’s hard to believe that Dizzy Reed is entering his 28th year as a member of Guns N’Roses. He is the longest serving member of the band apart from Axl Rose and like many of the bands current and former members Dizzy will be releasing his first solo album titled Rock N’Roll Ain’t Easy February 16th through Golden Robot Records.

The album has actually been in the making for the past 10 years and it was Del James a long associate of Guns N’Roses and one of Axl Rose’s best friends who suggested to Dizzy to go forward with the record and get it out and this also led to James co producing the album. In-between duties for Guns N’Roses including what will be a 2 year worldwide tour on the ‘Not in this Lifetime’ gig, Dizzy has kept busy guesting for several musicians. He has also performed singing duties with his side project Hookers & Blowers, and yet when you put this record on it is still a beautiful surprise to hear Dizzy’s voice. Perhaps it is because we always think of Dizzy at the back of the stage, on keyboards, bongos and piano with Guns N’Roses. In reality Dizzy is the engine behind GN’R, and his debut album certainly brings him to the fore front.

Opening up with the terrific ‘This Don’t Look Like Vegas’ which was co-written by Ricky Warwick (ex The Almighty) and current singer of Black Star Riders, Warwick also lends his guitar talents to the record. The song slowly builds up to a fusion of rock. Immediately you are reminded of influences, classic American rock which inevitably includes Guns N’Roses. But you can hear the old Alice Cooper band here too, this is timeless rock. On ‘Mother Theresa’ Dizzy screams “what have you become” with passion and ferocity.

‘Cheers 2 R Oblivion’ is probably the most pop sounding track on the record then again it turns heavy rock by its second verse and has a catchy chorus. Of course this is Dizzy’s gig and as well as vocals his playing skills on keys are also prominent especially on ‘Fragile Water’ which has a very Jaggeresque/Keith Richards vibe. There isn’t a bad moment or a feeling of filler song on the whole album though it is in its second half that Rock N’Roll Ain’t Easy really moves a few gears up. ‘I Celebrate’ has a killer riff and chorus and just becomes infectious, aside from some sliding guitars, Reed’s voice in perfect harmony, we get some saxophone in there too.

‘Crestfallen’ could be the best song on the album starting off slowly as Reed screams out his anguish in this perfect hard rock ballad which includes an insane 30 second guitar solo. ‘Forgotten Cases’ has the best chorus on the album, the type of song that ends and you go immediately back too. ‘Reparations’ is probably the heaviest track on the record and again Dizzy has been able to orchestrate such a catchy chorus. These songs will sound great live. For final song and title track Dizzy gets out the keys and unlocks this climax to a great record which may well take rock fans and even long standing Guns N’Roses fans by surprise, this is a great album to kick off 2018.

Dizzy has released a classic slice of perfect rock music. It is an album that you put on that may well transport you back to simpler times of the late 80s and early 90s. It’s fun, liberating and I challenge anyone not to sail down the freeway listening to ‘Reparations’ and not shout out, “fuck, yeah”.

Guns N’ Roses Bank Payment For Use Your Illusion Leaks