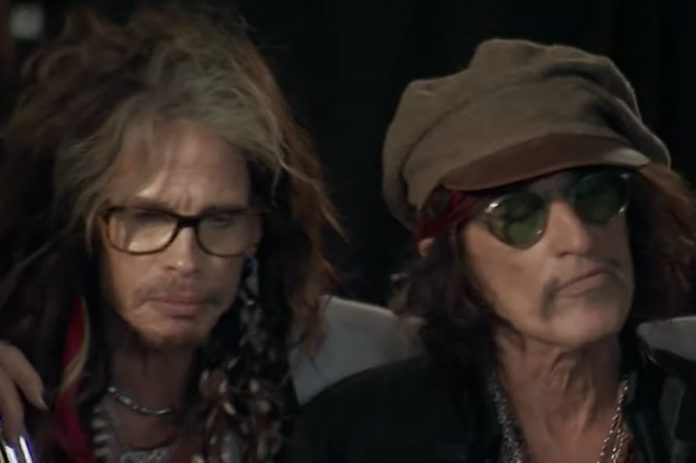 According to Steven Tyler’s autobiography, he fired Joe Perry from Aerosmith in 1979 after a fight, with Brad Whitford later departing as well. Bassist Tom Hamilton revealed when he realized Tyler firing Perry was a huge mistake in a new interview. An Aerosmith member made a sad cancer claim earlier this week. Backstage at a show in 1979, Perry’s wife Elissa threw a glass of milk at Tom Hamilton’s wife, Terry. Tyler confronted Perry about what his wife did, and ended up asking Perry to leave the band.

Hamilton told Music Radar, “It didn’t dawn on me that the band was essentially over.

We had a new hot guitar player named Jimmy Crespo who could play his ass off and write, and I thought we would finish the album we were forcing into existence, go on the road and everything would be the same, but it wasn’t. It just kept deteriorating until one day I was watching this new channel called MTV – and realised that we would probably never be part of it.”

Steven Tyler taking a photo with Gene Simmons’ wife was revealed earlier this week. Jimmy Crespo was Joe Perry’s replacement in Aerosmith on Night in the Ruts, and Brad Whitford left during the recording of Rock in a Hard Place, with Rick Dufay replacing him. Perry and Whitford attended a 1984 Orpheum Theater performance in Boston, leading to them reuniting with Aerosmith for the ‘Back in the Saddle’ tour later that same year, and eventually leading to their resurgence in popularity later in the 80’s. Aerosmith’s lineup has remained unchanged since 1984, though Steven Tyler was nearly replaced a decade ago after tension within the band.