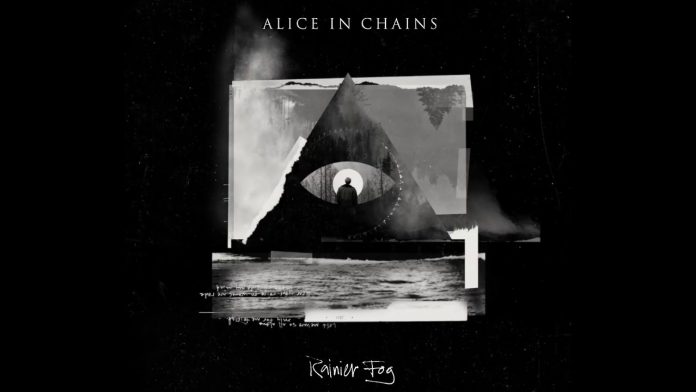 Rainier Fog is a great example of a band who know their strengths- and most of the time- can play to them very, very well. If by now you haven’t jumped upon the Alice in Chains train, there’s not much they can do to convert you. Wicked, haunting vocal harmonies, great dual vocal interplay and fantastic guitar work aside, if that’s not your cup of tea, it just isn’t. And that’s fine.

At this point, Alice in Chains are who they are. Rainier Fog is a double-edged sword in that way. The band has no shortage of hits throughout their fantastic career. From back in the heyday of 90’s grunge, they’ve always been counted upon to serve up solid, anthemic alternative rock songs that at times dabble in the metal and folk world simultaneously. And with that notion in mind, Rainier Fog does just that. They’re not going to go electro-pop all of a sudden! They’re not going to bow to modern day views on what mainstream music looks and sounds like. And for that we love Alice in Chains. But we love them because we’ve always loved them. And for what they’ve so consistently provided us with.

When listening to Rainier Fog, a couple of things are strikingly apparent. The first is that the album is a consistent listen of solid, anthemic alternative rock songs that at times dabble in the metal and folk words simultaneously (see what I did there?). And with that comes an album whose highs never go too high and whose lows never go all that low. And that is great. The only downside to that is there isn’t a “Man in the Box” or “Them Bones” here. And I know. We’re dealing with Alice in Chains 2.0 here. But even so, there isn’t a “Check My Brain” or a “Stone” here, either. Again though, it’s the consistency factor.

Rainier Fog moves along at a far more consistent clip than The Devil Put Dinosaurs Here. So, even though that album had the huge hit single, there was a certain lack of focus and a tendency for songs to go on for a minute or so too long throughout. By comparison, Rainier Fog is leaner, tighter, more focused and most of all, because of all of this, a much stronger album. Bands do’t always age like this. I can name a few “shells of their former selves” but I’ll spare them the indictment. Rather, Alice in Chains deserve to be commended for their mastery of their craft and their passion to not water down their discography with subsequent releases- but to enrich it. And that my friends, that deserves high praise. Let’s take a look song by song of their solid new album, Rainier Fog.

The first taste we got of Rainier Fog, “The One You Know” sets the bar high for the new album. Disjointed guitar riffs and some nice snare work send us off to the races. The off time riffs and maniacal vocal attack are classic Alice in Chains. Going from Jerry Cantrell alone to the blistering vocals of William DuVall works to great effect to build the momentum before Alice crash into one of their strongest chorus’ of the DuVall era.

There’s never been a shortage of great bass lines through out the years with Alice in Chains. See “Would” or “Rain When I Die”.  Here, on the title track, Mike Inez busts out a great bass riff eerily similar sounding to the days of the band’s self-titled album. The main riff of the song is a straight up the middle classic Jerry Cantrell riff. The song carries a lot of energy which lends it to being a great choice for the album’s tour.

The opening harmonies of “Red Giant” will literally shock, scare and surprise you. The track makes great use of vocal distortion which only helps to build up the beautifully unsettling verse vocal. Throughout the track, if you just lose yourself in the music, you might actually find yourself mistaking William DuVall for Layne Staley. That is a compliment of the highest order. As you’ll see throughout this album, DuVall really makes his impact felt in a bigger way than on his two previous Alice albums and for that, the album is better.

“Drone” begins with a sludgy swing reminiscent of Down with it’s thick guitar and the grinding bass line underneath. The vocal harmonies on this epic track sway about nearly pulling you off the edge of your seat waiting for them to come full circle. The wah-drenched lead guitar work of Jerry Cantrell takes center stage as he lays down one of the finest guitar solos in a career filled with memorable guitar licks. Where the previous track suffered from being too safe, “Drone” really succeeds with its brooding swagger and unexpected left turns.

One thing Alice in Chains have consistently succeeded at more than some of their contemporaries is creating a mood with their music. Their songs aren’t just songs. They are living, breathing beings. “Deaf Ears Blind Eyes” is a shining example of this. You don’t just hear the vocals- you feel them. The impassioned yearning of Jerry Cantrell’s vocals hit the spot on this burner.

The a capella lead in to “Maybe” gives way to a subdued track that relies on the fantastic vocal work of Jerry Cantrell. The acoustic-tinged track is reminiscent of Jar of Flies– era Alice when they relied less on crushing guitars and more on the simplicity of acoustic-driven alternative rock. The track is a great juxtaposition to a lot of the other aggressive, in your face grunge rock throughout Rainier Fog. All due respect to Mike Inez and his fantastic bass work here, as well.

The second track to be released ahead of the arrival of Rainier Fog, “So Far Under” will go down in history as William DuVall’s greatest moment. Written entirely by DuVall, he said “The lyric is a cold, hard assessment of a difficult situation.” On his two previous Alice albums, DuVall has more than held his own among the immense legacy of his predecessor. But here, the confidence and power in his vocal in the chorus will stand the test of time as the moment when he officially got his Alice in Chains’ wings. And that guitar solo! DuVall’s mark is felt all over this album but that guitar solo is one for the books.

“Never Fade” is a great modern take on the classic Alice in Chains sound. The music has a modern feel while the vocal approach and effects in the verses is a nice tip of the hat to Dirt-era tracks like “Godsmack”. The song is elevated by the driving rhythm section with Sean Kinney really carrying the song along. “Never Fade” has the most potential at rock radio and is the strongest track on the album in that regard. The strong chorus melody and instantly relate-able nature of the lyrics are the perfect storm for another strong Alice in Chains’ single.

“All I Am” brings the album to a close in a big way. Calm, eerie and chilling, The song carries with it an understated sadness. The lyrics can be interperated in a number of ways- or better yet, possible be in reference to any number of fallen friends Alice in Chains have known throughout their career. It’s easy to look at this track and immediately see Layne Staley or Chris Cornell as its subject matter. And while that may be a possibility, what’s more important is that Alice sees the album to its conclusion with this unexpectedly heartfelt song to see us of. Ending the album with a track like this is no doubt a risk. But it’s a risk that more than pays off.

If you have been anxiously awaiting Rainier Fog, you won’t be disappointed. The album is very good addition to their extensive back catalog. At the current moment, I believe this to be the ultimate WIlliam DuVall era album we’ve seen so far. The band’s chemistry and comfort together really comes through in the music. Perhaps going back to Seattle played a role in this as this feels the most like the band’s heyday since their actual heyday. In 2018 and with the state of rock as we know it today, it’s wonderful to see Alice in Chains deliver the goods once again.

Must Listen Tracks: Drone, Rainier Fog, All I Am.