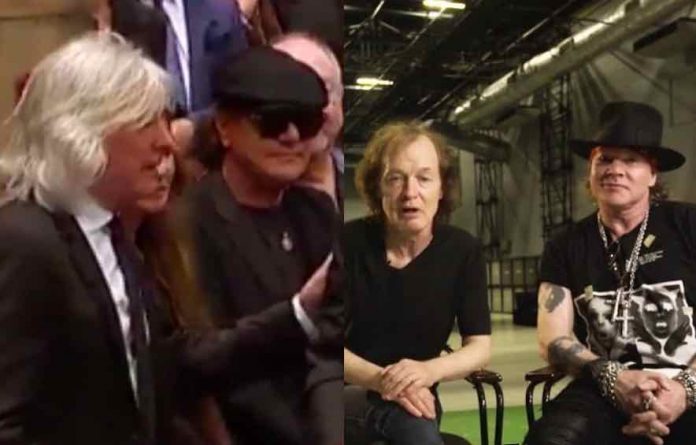 Guns N’ Roses bassist Duff McKagan recently discussed why Axl Rose felt he had to replace Brian Johnson in AC/DC when Angus Young called him in 2016 in a new Classic Rock magazine interview. An AC/DC icon told Angus Young to ‘retire’ before the 2020 tour.

The interviewer asked, “Specifically, Axl taking on another job during breaks in GN’R’s schedule – singing for AC/DC after Brian Johnson had to withdraw from their Rock Or Bust tour.”

“That came out of nowhere, as we all know. But Axl had to do it. It would have been like if Prince had asked me to play because he’d lost a guy. I’d have said: ‘You know I have to do this, right?’ It was more of that than anything else.”

Duff also discussed the state of politics in the world, “I don’t even know if I’m reacting to the current situation so much. Sometimes, if I dare turn on cable news or look on Twitter, it’s like you open that door and there’s all this noise going on, and you just shut that door [laughs]. But going around the world with GN’R, you see so much changing.

We played a city in Poland where a couple of months earlier they had a rally with a couple of hundred thousand Nazis, basically. I read history, and we have seen things like this before. In the end I noticed that the quality of my life got a lot better when I didn’t look at Twitter or the TV news. Just talking with people, one on one, the quality of my mind-set got better.” An AC/DC singer ‘refusing’ to forgive Angus Young was just revealed.