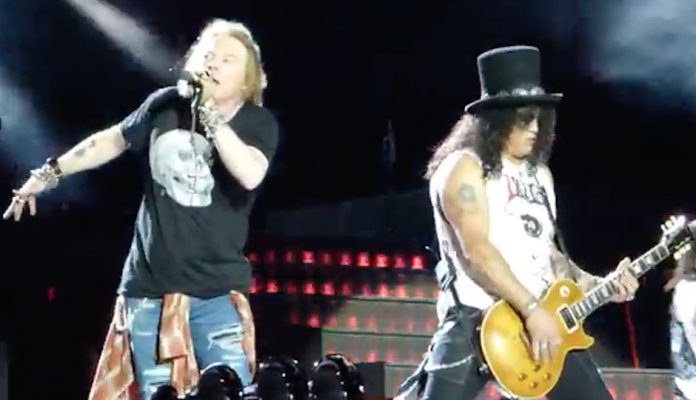 Axl Rose‘s longtime Guns N’ Roses tour manager Del James has revealed a new photo of Axl, Slash, and Duff McKagan’s bathrooms. Axl and Slash’s bathrooms are not right next to each other, with Duff between them. A Motley Crue member discussed a Guns N’ Roses member that Axl Rose fired yesterday.

Del James said, “And you thought this rock & roll thing was all glamour…”

Eddie Trunk appeared to criticize Guns N’ Roses’ current tour on a recent episode of his SiriusXM show. Tom 2112 reported on MyGNRForum.com, “Mentions long guitar solos, and bands covering The Who instead of playing their back catalogue. I mean it sounds like he called gnr out, in everything but name. He did just watch them at Exit 111.

Also, I heard him respond to a caller who went and was disappointed about the opening night of the current tour, saying it was the first time he was completely underwhelmed watching GNR live. Eddie basically said, they shouldn’t be playing gigs and working kinks out when the ticket price doesn’t reflect a lesser show. They either can play at a consistent level on night 1 as they do on night 20, or don’t charge as much until they can. Sounds like he has a few opinions, and he’s not putting them totally on blast because he still wants that interview.”

Then we’re joined by Brett Buchanan from AlternativeNation.net. Brett and Brando give their review of Austin City Limits weekend 2 and discuss a GNR fan getting banned from shows.” Slash called out Rock and Roll Hall of Fame disrespect last weekend.