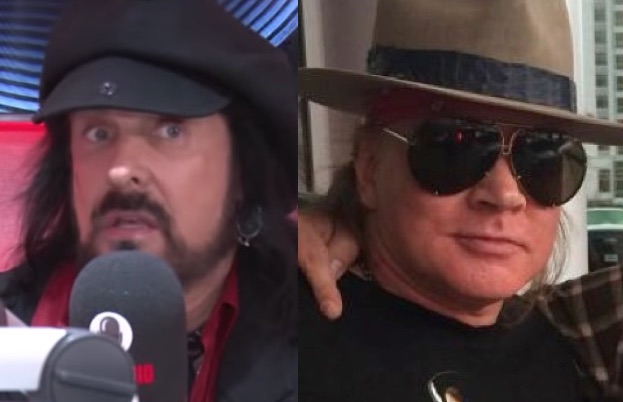 “I worked at Turner’s Liquor store in the late 70’s before I met Tommy [Lee], Vince [Neil], or Mick [Mars]. I remember that I would be behind the counter, 2 o’clock in the morning in Hollywood in the 70’s, and I remember there was Ginger and Maryanne from Gilligan’s Island.

Some people were Maryanne people, and some people were Ginger people. You people probably don’t even know what I’m talking about. So Ginger came rolling in, hammered. Hardly any clothes on, fur jacket, and I’m like, this is awesome.”

Axl Rose abandoned a “November Rain” performance a couple days ago. Sixx added, “Some kind of older rock stars came in, I’m not going to use their names. But all these different kinds of people would come in, and this one kid came in and said, ‘Could you sell me some rum?’ And it was Gilby Clarke.”

Brittany Furlan tweeted this week, “Don’t ever get used to cursing at one another in a relationship. It sets an unhealthy tone and will make fighting hurt much more. When angry or upset, it’s best to take a step back and reflect, go outside if you must. You don’t want to end up saying things you cannot take back.” A Motley Crue icon revealed a small crowd at a show earlier this week.