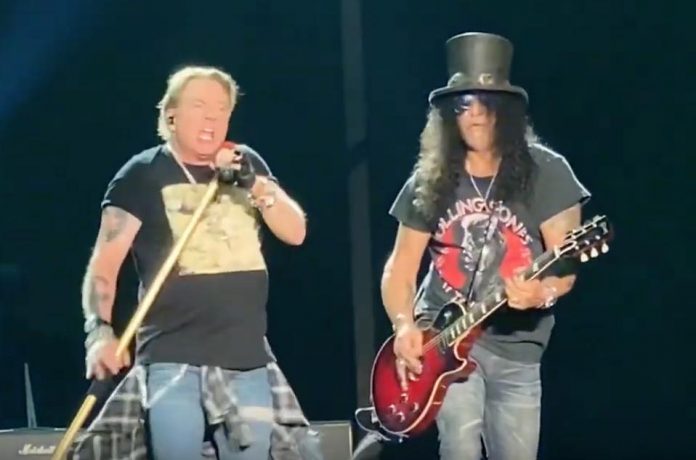 Slash and Guns N’ Roses put on a stellar show in Oklahoma City on Wednesday, but it didn’t go off without a hitch, as a technical problem during “November Rain” led to Slash, Axl Rose, and company abandoning the performance, before later picking it back up. A power outage stopped a Guns N’ Roses show a few days ago.

Rich Eaker tweeted, “Awesome show. Was bummed when the piano wouldn’t work. Thought we were not going to hear November Rain. You guys went on while the problem was fixed, brought the piano back out, and then hit a grand slam. Thank you for not just skipping it. Kudos to the guys who fixed it.”

The band also performed “Dead Horse” for the first time in decades, and some fans called the performance sloppy, though they were thrilled to see it live after so long.

Slash called out Rock and Roll Hall of Fame disrespect last weekend. Underhardy posted on MyGNRForum.com, “I’m not trying hate here. Trust me. I’m stoked for Dead Horse being played. But there were 3 separate times through out the song where parts were messed up. In the intro, the crowd sang the lines that the band just decided to skip? We’re they out of tempo? And the end was kinda rough.

Im just saying, for guys (mainly Axl) making probably over a million bucks per show, can’t they care enough to rehearse the songs down a few times so they can knock them out of the part when they debut them?”

KeyserSoze wrote, “I didn’t even think it was that bad. I think the only think that took me off guard was Axl not singing the lyrics. You would think the man that wrote that whole song would be able to at least remember the line that sells that whole song and the way it’s set up.

As for the actual performance, beside the already mentioned vocal flub, they were GOLDEN up until the solo, and even the first part of the solo is Slash being Slash. If I was the band, instead of having Frank keep time, I’d just have Slash go for the intro, especially if Axl’s not playing the guitar. I honestly think Frank keeping time threw Axl and Slash off their game.

In the beginning of the clip, Slash is hunched over in his ‘Berry’ stance and literally looks like he’s about to shit himself, mean while Axl is going faster than the underdog at the Kentucky Derby. Duff is literally standing there. Axl literally looks like he turns off mentally and pshyically before “maybe if I look real hard…..” Duff turns and looks at him like ‘bro are you there?’Fortus does play the wrong rhythm which probably threw Slash off. But Axl really just came in out of timing, which in turn threw the whole band out of wack.” Slash’s brother leaked a horrible Axl Rose wig photo last week.