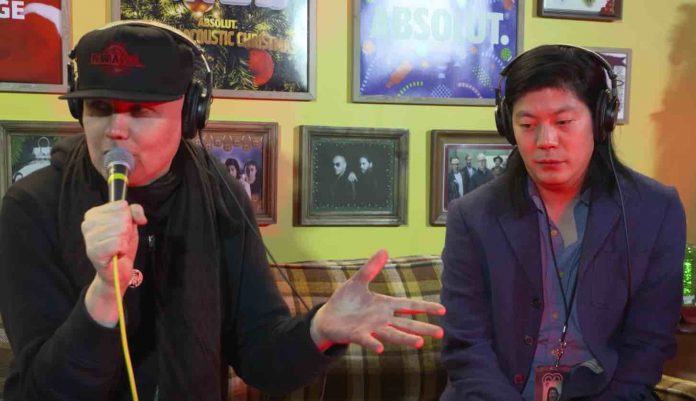 Billy Corgan revealed that The Smashing Pumpkins turned down MTV Unplugged in the 90’s ’cause MTV disrespected us’ in a new Instagram Q&A. Corgan also revealed that he is open to the Pumpkins touring with the newly reunited My Chemical Romance. Fans have joked in the past that Gerard Way looks like he could be Billy’s son. The Pumpkins just toured this past summer with Noel Gallagher’s High Flying Birds, and they co-headlined with Marilyn Manson on ‘The End Times’ tour in 2015. Corgan made a new Rage Against The Machine album claim a few days ago.

A fan asked Corgan, “Could you see Smashing Pumpkins touring with My Chemical Romance/Deftones?”

Corgan responded, “Absolutely. Love both bands.” After threatening to quit touring solo yesterday, Billy has confirmed that he will never do a solo acoustic tour again. He said, “This is definitely the last solo acoustic tour. If I tour as WPC again it would only be with a band.”

A disappointed fan told Corgan, “PLEASE don’t let idiots put you off the solo gigs. Couldn’t make one this year.” Corgan responded, “I’m sorry, but it is more complicated than one bad apple, or two, or three. As I’ve said this is it for solo acoustic tours.” Another fan asked, “Saw you in Louisville, Kentucky years ago. But you wouldn’t take pic after the show. Why?” Corgan answered, “You’re asking why I wouldn’t take pictures after a show years ago? Seriously…”

Corgan also elaborated on the incident at the Covington concert. He said about rude heckling fans, “Hey, they bought a ticket. I appreciate that. The rest was beyond my control beyond walking off and cancelling. Still, I played 26 songs…” Another fan said, “Sorry to hear about Covington. Has the rest of the tour gone well crowd wise?” Corgan responded, “Crowds have been amazing so this was like nothing I’ve ever experienced.” Corgan called out a drunk fan at another recent solo performance.