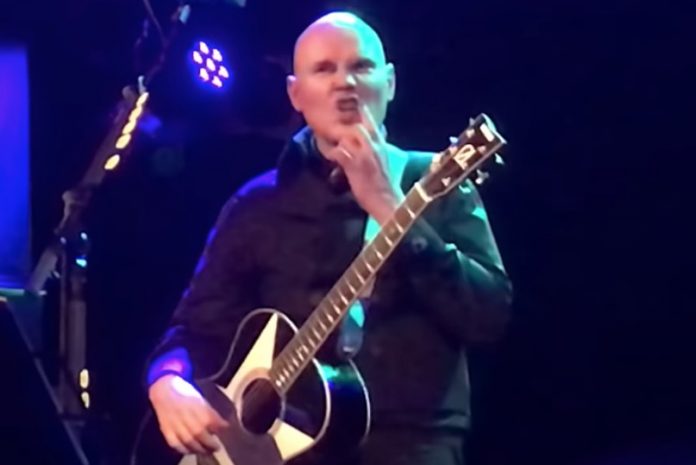 Smashing Pumpkins frontman Billy Corgan reacted to a heckler during a solo performance a few days ago, who wanted him to play the song “Ugly.” Howard Stern recently revealed if he enjoys Billy Corgan’s voice.

Privatexradio posted on Reddit, “There was this obnoxious couple sitting next to me. One was clearly the DD and the husband was drunk.

Drunk husband yells ‘Play Ugly!’ As he was going into Spaceboy, but he was telling a story beforehand.

Billy said, ‘Sorry, I’m not a human jukebox, I don’t remember every song I wrote.’ Something along the lines of that. The guy keeps egging him on more, eventually Billy said, ‘Look, I know you’re ugly and this song is directed towards you but I’m not going to play Ugly. I know you’re peaking on your THC gummies or whatever but I’m going to go into my next song which isn’t Ugly.’ Edit: he wasn’t actually high, he was incredibly drunk. Billy just assumed he was high.”

Billy Corgan revealed why D’arcy is ‘done’ with Smashing Pumpkins a month ago. Sleepwalkchicago responded, “Damn this was like when I saw the Plainsong tour in Chicago. It was my first SP concert and I was so excited and even went by myself. The dude next to me was screaming/singing along to every single song basically and a guy in the crowd would yell ‘Play Mayonaise’ after every single song, even after Mayonaise had been played. Plainsong tour was meant to be a quieter more intimate show so I was pretty bummed out by adults who can’t handle their booze or know their surroundings.”

Schufflemode wrote, “I had a similar experience in North Tonawanda on the Plainsong Tour, as well. I remember a drunk guy kept walking up and down the aisle next to me yelling, and loud chatter coming from the bar at back of the auditorium. Billy called them out by saying, ‘I figure if songs about my dead mother don’t shut you up, my ukulele will,’ after ‘For Martha.’

Props to the taper for capturing a decent recording despite the noisy audience. I also remember a couple of girls took a selfie down by the stage and Billy tried photobombing by giving them the finger in the background (during ‘Ava Adore,’ IIRC); I think this would be a funny picture but I haven’t been able to find it.” Billy Corgan revealed he’s ready to tour with Alice In Chains a couple of months ago.