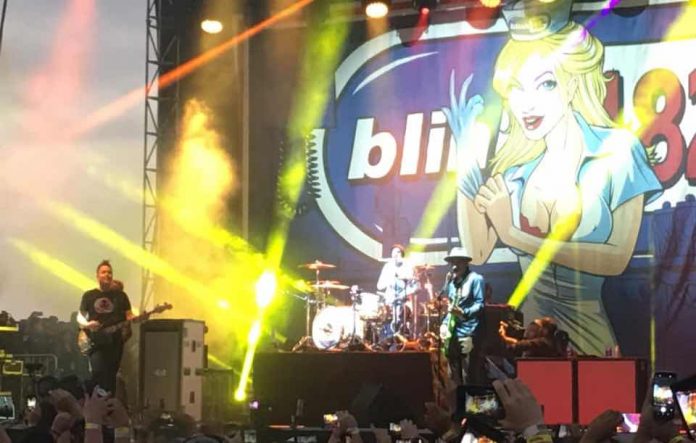 The Back to the Beach Festival held the first day of its festival in Huntington Beach, CA on Saturday, and it was one of the most visually stunning shows I’ve ever been to. I’ve seen shows at Doheny State Beach in Dana Point before, but to get to see a show at Huntington State Beach was incredible. The stage set up and entrances were great, along with the sound. At many of these beach festival shows the sound can be inconsistent, but it was perfect at this show.

Reel Big Fish really got the crowd going as the third to last act, but Goldfinger was an all star show, with 311’s Nick Hexum, Sublime With Rome’s Rome Ramirez, former Goldfinger guitarist Charlie Paulson, The English Beat’s Dave Wakeling, and Save Ferris’ Monique Powell making guest appearances. A cover of Blur’s “Song 2” with frontman John Feldmann crowdsurfing was probably the highlight of the set, though the Sublime “Date Rape” performance with Rome Ramirez got the biggest mosh pit of the show so far going.

Blink-182 kicked off their set performing Enema of the State in its entirety to celebrate its 20th anniversary, featuring the first performance of “Aliens Exist” without Tom DeLonge. The sold out crowd was moshing and dancing constantly during the performance, and singing along to every word. It was a rowdy and fun crowd, with a ‘green shirt’ guy becoming a star to many fans in the crowd. It was a real treat to see the album performed in its entirety, and it was really in the perfect setting. The band followed this up with playing “Feeling This,” “Bored to Death,” “The Rock Show,” “Violence,” and “Dammit.”

It was a great night for Blink-182 to honor their past just before they kick into another new album cycle, as the band plan to release their second record with Matt Skiba this summer. The Back to the Beach festival is really one of the best in Southern California, and if you live in the area, you should check out Day 2 with The Used on Sunday, or make plans to come out next year!