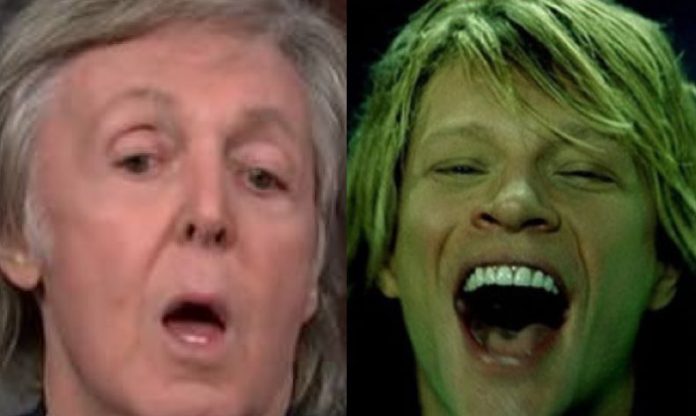 Howard Stern claimed that Bon Jovi told him that during a dinner between himself and iconic co-founder of the Beatles, Paul McCartney, was asked to listen to an alleged new album’s worth of material recorded by Jovi and wanted McCartney’s opinion on it. Paul McCartney brutally ‘humiliated’ by Bon Jovi.

MarksFriggin.com recapped: Howard said Jovi told him a great story about Paul but he’s not sure if he should tell it. He said it might not be a big deal. He said Jovi was telling him that he wrote a bunch of new songs and has a new album coming out. He said Jon was sitting in his house and asked Paul to come over and listen to what he has. He said Paul came right over and listened to the whole record with him. Howard said he should have Jon in to tell the whole story.

In other Bon Jovi news, fans recently took to social media to reflect upon one of Jovi’s biggest albums to date – ‘New Jersey’. One fan proclaimed: “New Jersey is one of Bon Jovi’s greatest albums. It was originally slated to be a double album, but the record company in their stupidity backed out. This treasure box includes the songs that didn’t make the cut in their demo form. It’s hard to say that this is Bon Jovi at their finest because this is one of those few bands that has been consistently great for thirty years, but this is certainly Bon Jovi during one of their songwriting peaks. The New Jersey package is something every fan should have in his collection.” This Van Halen member viciously mocked Bon Jovi over the summer.