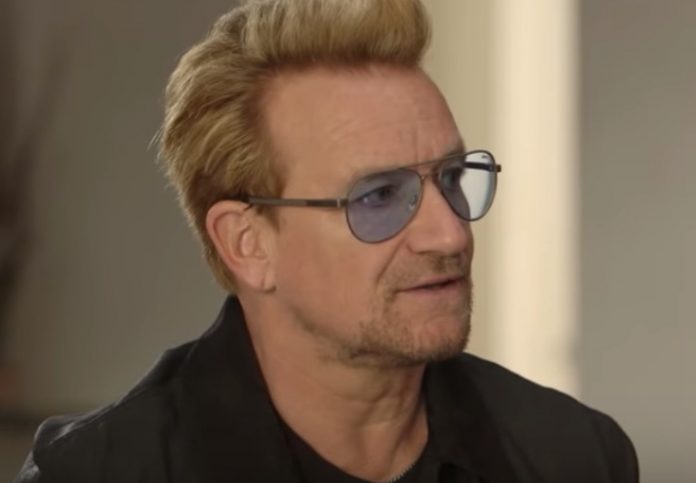 U2 frontman Bono recently spent the holiday season singing Christmas carols on the streets of Dublin, Grafton Street to be exact. However, that didn’t stop one detractor from getting their snide remarks in even with Bono’s goodwill gesture on Christmas eve. One Twitter user took to social media to state the following: “Bono would be appreciated more if he and the Edge paid their taxes in Ireland.” U2 singer Bono spends ridiculous money on car.

In other news regarding Bono and U2, fans recently took to social media to discuss the legacy and impact of one of the group’s most experimental and underrated albums – Zooropa. U2 member ‘threatened’ at party, was Bono wasted?

One fan stated: “I’ve only had a chance to listen to this pressing a few times, now, but the vinyl sounds excellent, and the blue is cool looking… something a little different always adds to the joy of playing a record. Of course, I’ve been listening to U2’s music since the early 1990s, and there are some great songs here: Dirty Day is easily the best, and Johnny Cash on the final track is awesome as well. The rest is hit and miss: Lemon is shimmering and cool, with surprising power, but the falsetto can also be annoying if I’m in the wrong mood. Anyway, it’s a good addition to my U2 collection.”

While another fan wrote: “Zooropa remains an astonishing aberration in the U2 catalog even a decade after its release because the band seems to have seemingly buried it – no one ever discusses the hits from the record, even though, at the time “Lemon” and “Stay” did remarkably well on the radio. It’s a darker, more cavernous take on the sounds of Achtung Baby, and it might not be the classic that album is, but it does show a band just off the heels of a great reinvention proving to themselves why they’re so vital. Their songwriting is perhaps the best it ever was, and the atmosphere doesn’t drop for its ten songs – plus the Johnny Cash climax is just unforgettable.” Bono ‘begging’ for prayers was just revealed.

Bono would be appreciated more if he and the Edge paid their taxes in Ireland . https://t.co/1g3oZbszmk