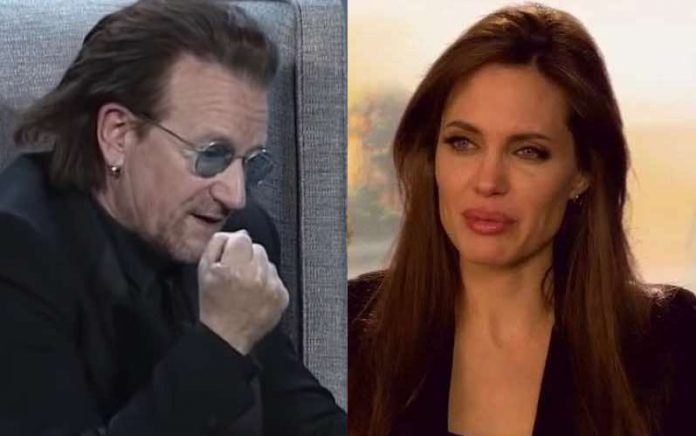 The daughter of U2 frontman Bono, Eve Hewson recently took to social media via Instagram to showcase this very intimate photograph of the U2 singer with A-List actress Angelina Jolie. Bono is the godfather to Jolie’s twins Vivienne and Knox from her marriage with Hollywood bad boy, Brad Pitt. U2 singer Bono ‘looks like a woman’ in new photo.

In other news regarding Bono and U2, fans recently took to the U2 subreddit to discuss the legacy and impact of the group’s hit song ‘Soon’, the title song off the album of the same name, originally released in 2010. One fan put: “Very nice tune, fits the “Afropop” theme that the band originally had in mind with NLOTH. I think it would’ve been a good fit on the album as an opener to the second half of it, so after Unknown Caller and before Winter, FEZ/Being Born, White as Snow, Breathe, Cedars of Lebanon. I find it a shame that they didn’t go forward with the “being transported to Fez” vision that the album has in mind with its songs because it could’ve been something great, and this song shows that.” Slash calls out Bono for terrible U2 performance.

While fellow Reddit user [mancapturescolour replied: “I think this was meant to be on Songs of Ascent in its full version (Kingdom of Your Love), but then they shelved the album plans and released this in a shortened form (Soon) with the concert film set to please the fans. There was another teaser with a similar vibe that was played before Beautiful Day early on the 360° Tour. (A female voice repeating “We love you” and some words in a language that I don’t comprehend, possibly Arabic chants?)” U2 singer Bono sad A-list pedophile secret revealed.