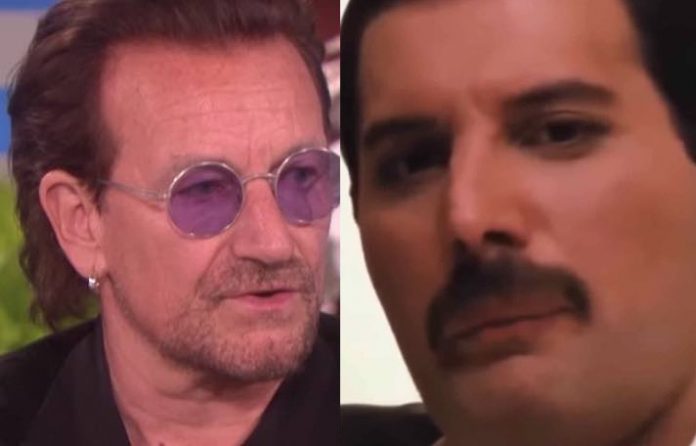 Queen frontman Freddie Mercury and U2 singer Bono were two of the biggest stars to perform at Live Aid, which celebrated its 34th anniversary just a few weeks ago. Bono revealed that Freddie got a bit flirty with him backstage when they met, and before their meeting, he didn’t realize Mercury was gay, though a friend later explained to him how it was somewhat of an open secret. New details on Freddie Mercury’s secret Prince tape were also recently revealed.

Bono said, “I was walking with [my wife] Ali, and Freddie Mercury pulled me aside and said: ‘Oh, Bo-No….is it Bo-No or Bon-O?’ I told him, ‘It’s Bon-O’. He said, ‘Come over here with me. We’ve all been talking, Roger [Daltrey] and Pete [Townshend] and David [Bowie], and we all agree there’s no singers any more, everyone is shouting these days, but you’re a singer.’

“I was up against a wall and he put his hand on the wall and was talking to me like he was chatting up a chick. He had me laughing but I was shifting nervously at the time, with Ali and myself exchanging glances.”

Bono later added, “I thought, ‘Wow, this guy’s really camp.’ I was telling somebody later and he said: ‘You’re surprised? They’re called Queen!’ But I was really amazed. It hadn’t dawned on me.”

A Queen member recently revealed a Freddie Mercury classic he dislikes. The Bono quotes were obtained by Express. Mercury later died in 1991 and Adam Lambert, another LGTBQ singer, is now stepping in for him on vocals with Queen on the ‘Rhapsody’ tour. Brian May wrote about a recent performance at the iconic Madison Square Garden in New York, “THANKS Madison Square Garden folks. Probably Loudest in the Western World !! What a thrill !! Let’s do it again tomorrow !!! Thanks also to stereo photographer Joseph Murray. Swipe to see parallel stereo or cross eyed stereo or glorious mono !!! Bri.”

sleestackx told May, “Sold out. Sold out. Sold out. Sold out… All thru the years, everywhere you go. Attesting to the timelessness of the group’s musical career. Betcha some times you sit back and contemplate what kind of magic congruence of vectors conspired to make this possible with its everlasting staying power. Dream Theater has an album called The Astonishing. That album should’ve been about QUEEN.” While Queen are active, U2 are currently taking it easy ahead of their November Australian tour dates. Howard Stern reacted to Bono disrespect on his show recently.