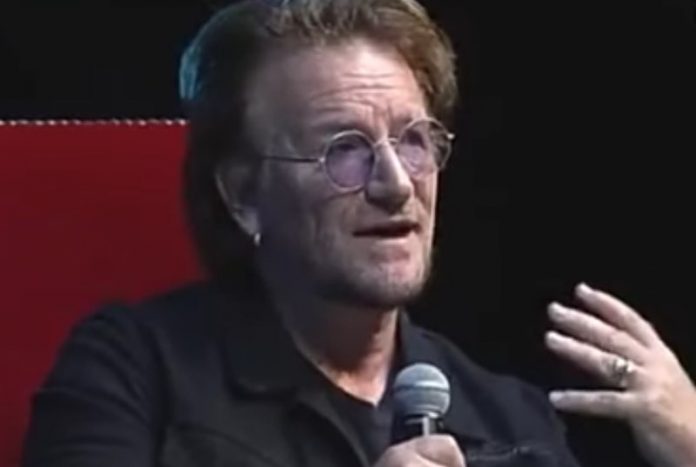 U2’s frontman Bono‘s daughter Eve Hewston posted the following picture with herself, her sister and her father at this year’s Glamour Awards’ where Bono was presented with ‘Man of the Year’ honors. Bono family leaks ‘gross’ Angelina Jolie U2 photo.

Hewston wrote the following statement: “Even though our facial expressions would suggest otherwise, we really were very happy and proud to see dad become the first Man Of The Year at the Glamour Awards last night. In a year where men are celebrated, rewarded and even granted the presidency of the United States for bragging about sexually assaulting women, encouraging violence against women, for planning to take away a woman’s right to her own reproductive health and for being just plain WRONG on SO MANY LEVELS, it is important to take a moment to celebrate the men out there that are getting it right! ”

Fans also congratulated Bono in response to Hewston’s Instagram. One user put: “I never thought I would ever see the day Bono and family become advocates for abortion. Perhaps it makes sense… so-called Catholic Bono’s self-proclaimed idol non-other than Bill Clinton pushed for abortion more than any other President in the history of the USA and on a global scale. For the first time ever the Pope calls a leadership out by his Al Gore and Bill Clinton for their misdeeds and called them liars.” Slash calls out Bono for terrible U2 performance.